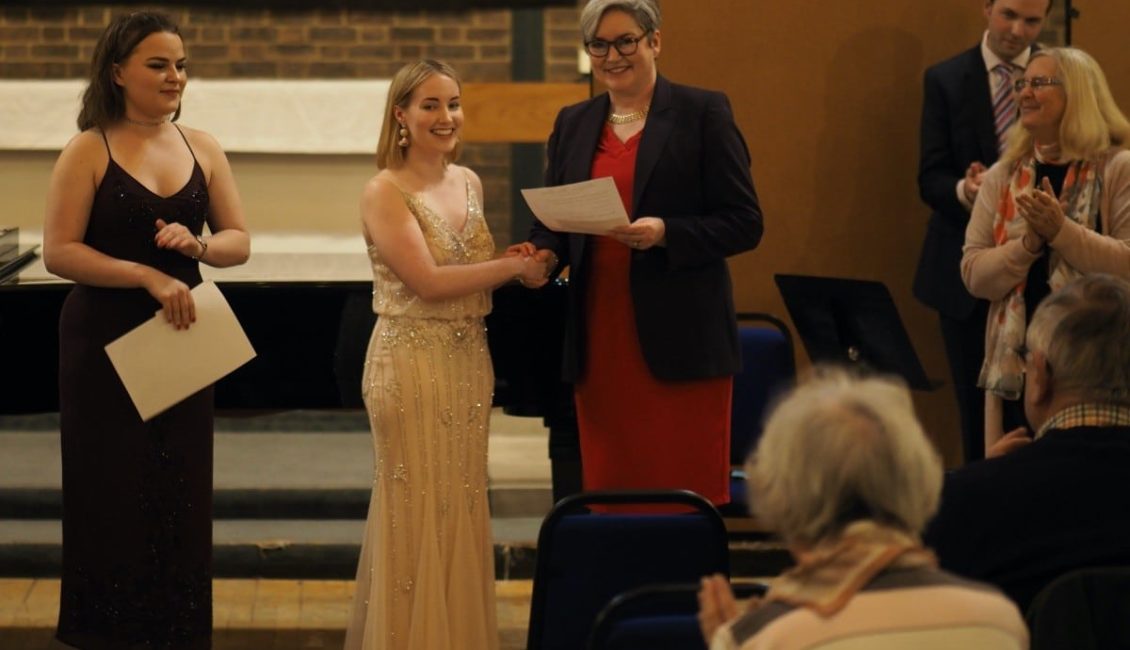 As well as promoting first-class concerts and lecture-recitals, CMS is proud of its tradition of supporting the musical careers of students at the University. Since 2004 over £90,000 has been awarded in prizes, instruments, and bursaries.

This year’s varied concert showcased some of the most talented students from different courses and unlike the event in previous years was not a competition but an opportunity for the students to give a professional performance with a fee awarded by CMS.

Louise Logdon (flute) opened the occasion. Louise is a Master’s Music Performance student specialising in the flute. She studied music at Surrey University fifteen years ago and has taught flute since then. She is currently doing a Master’s alongside her role as a mum to two boys. She is particularly interested in the gypsy music of Hungary.

Second to perform was Kim Woodley (violin). Kim has been a violinist for 15 years and mostly plays romantic music, but she is capable of all genres. Her experience varies, from leading some of the university’s orchestras to performing as a soloist for private events. Kim is months away from graduating with a degree in BMus performance, and is continuing with a Masters degree here in Chichester!

The first vocalist of the evening, Jade Batson, came next. Recently graduated the BMus (Hons) Vocal Performance course with a First-class degree Jade is currently on Advanced Performance. She performed in the world premiere of “Agreed” at Glyndebourne Opera House. Notable roles include The Witch in “Into The Woods”, Grizabella in CATS and Diana in “Orpheusin the Underworld”.

Crystal Corkish (piano) brought the first half of the evening to a brilliant close. Crystal began piano at the age of six. In her most recent work she has represented the Cayman Arts Festival in a two-musician Musical Soirée, opened a recital in the Westin Ballroom and filmed recordings for the Cayman Music School website. She is a National Young Musician of the Year Finalist three years in a row and has been awarded a Gold four years in a row at the National Children’s Festival of the Arts. She now looks forward to being able to perform for the first time in over a year.

At the conclusion of the evening, Mark Barlow, Chief Marketing & Communication Officer, representing the Vice-Chancellor who unfortunately was not able to attend in person this year, presented awards on behalf of CMS to each of the performers to mark the occasion. He noted the close and mutually beneficial relationship enjoyed by CMS and the University, and wished all of the students the very best of luck in their musical careers.