Chichester Singers keep singing together during the lockdown 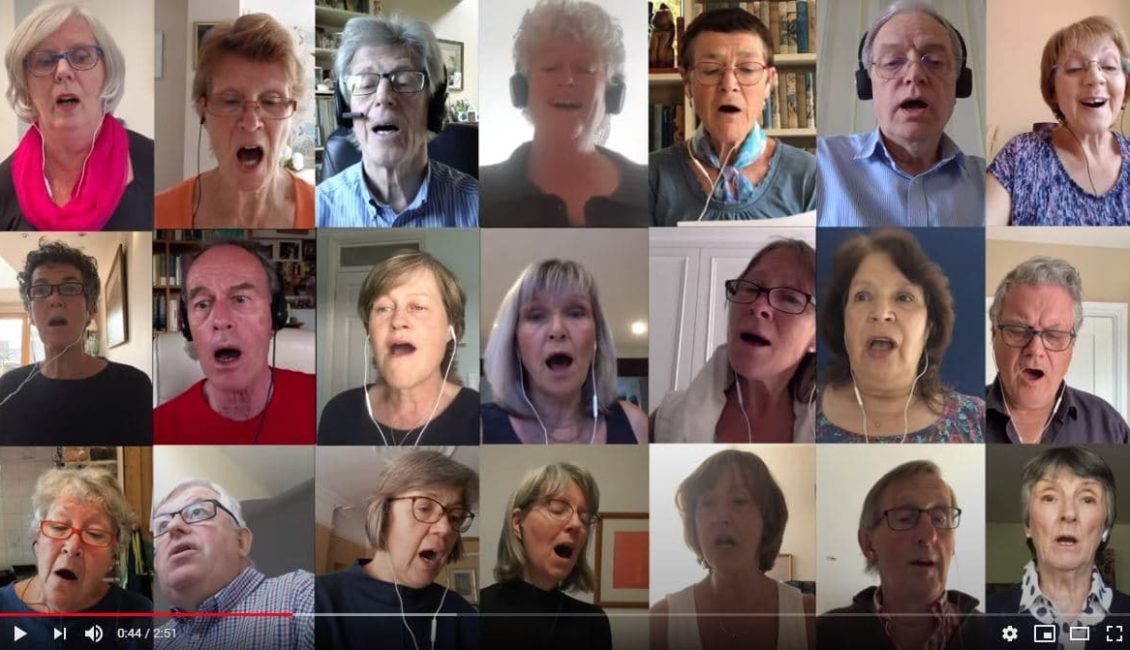 To combat this, the Chichester Singers has recently released a video of 68 of their choir members singing Mozart’s short choral motet Ave verum corpus in isolation.

Jonathan Willcocks explains. “I asked our accompanist Sue Graham Smith to make a selfie-video playing the accompaniment. I then asked all our singers, while listening to the accompaniment through headphones, to sing their own soprano, alto, tenor or bass part while filming themselves on their phones, and to send the video to me. We had 68 videos back, and my son Charlie then undertook the Herculean task of mixing them all into a single video.

“I think it has been a great deal of fun for everyone involved, even though quite a few said that they found the experience of singing alone to a camera terrifying and humbling! I was even accused by some of subjecting them to a form of covert cyber-re-audition, and some who didn’t send me a video have admitted that they did film themselves singing but were too horrified by what they saw and heard to send the video to me!

“As with all amateur choirs, there are some singers who are much more able than others, but the result is living proof of the miracle of large-choir choral singing – that the whole is so much more than the sum of the individual parts.”

“Alone but together beautiful, soul-enriching singing. Thank you” – Louise Goldsmith

The first stage was for the choir’s accompanist Sue Graham Smith to record a video of the piano accompaniment to the piece, which was circulated via a YouTube link amongst the choir, ‘locked down’ in their own homes. The singers were invited to record their own video, singing their own part of the piece, whilst listening to the accompaniment in earphones. This ensures that all singers are kept in time, but that each individual video features their voice alone, which can then be combined with all the singers’ videos to produce a performance as a unified choir.

Once all videos were received, there were two quite separate jobs which run in parallel. The sound from each video was stripped away to create an audio file for each singer – all the resulting audio files were imported into Apple’s Logic Pro X specialist audio editing software which gives you fine control over the sound. All files are “lined up” and synchronised with the accompaniment, then the sound of a choir can be created firstly by balancing the volume of each singer against everyone else, also using panning to scatter the singers around the left-to-right stereo spectrum, adding reverberation to create the feeling of a “space” the singers are in, and automating various parameters like volume, to create an overall blend.

Meanwhile, all the video files are imported into Apple’s Final Cut Pro X video editing software which allows you to line up and synchronise all videos so they are in time with each other, then to trim and resize each video to give them all a roughly uniform perspective (i.e. head-and-shoulders shot), and then to arrange them in any way you want on the screen, cutting and rotating between videos that are visible and those that aren’t at any one time. Then further automation can be used to have videos moving around the screen, while at the same time zooming each video out, to allow all faces to be visible on the same screen by the end, enabling you to gradually to build a collage of faces. When you get to the end, everyone’s individual video will finish at a different moment, depending on when they happened to press the stop button on their video recording at home. These could all be trimmed to finish at the same time, but I chose to let them all finish naturally, similar to lights being turned out one by one in a building. The software also enables you to put short video transitions, such as fade-ins and fade-outs, on the start and end of each video clip, which takes away any abruptness from changes in clips.

The final audio is then exported as a stereo mix from Logic, and this resultant master sound file is imported to the Final Cut session, lined up with the existing video, and replacing the sound from the individual videos.