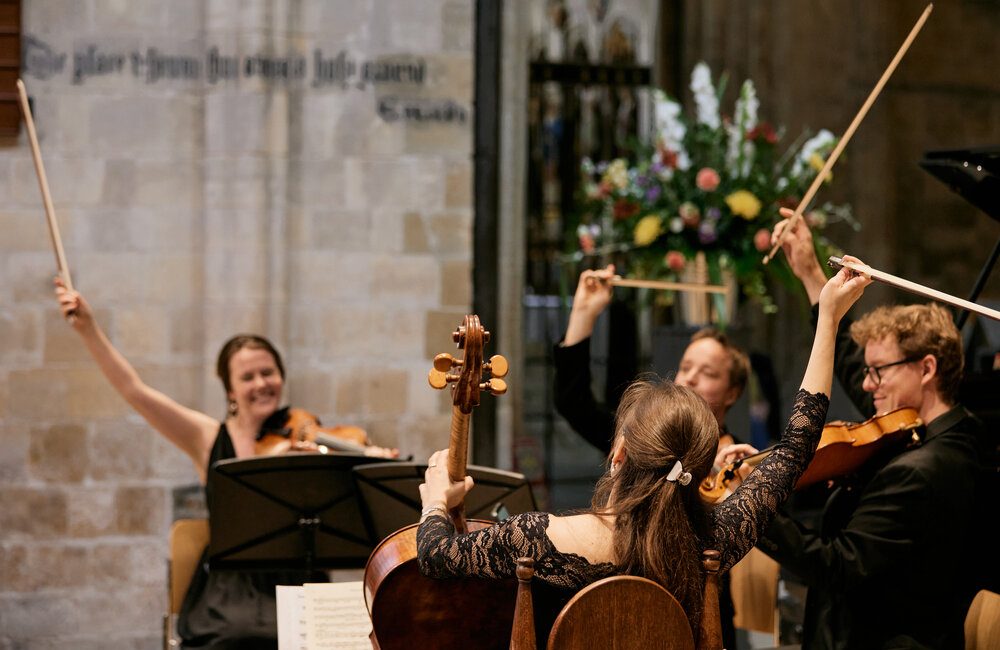 The Festival of Chichester is well underway and Elena Toponogova returned to the Cathedral with some friends to present more of her Russian repertoire (lunchtime concert 5 July).

She began alone at the piano with an extra item, the traditional Ukrainian folk song, The Willow Board, which was all stillness and thus eloquent.

She was then joined by the ensemble for Prokofiev’s Overture on Hebrew Themes which was Russian in the string quartet but klezmer in the clarinet. A broad cello theme with busy, light piano accompaniment was introduced before the piece sped to its end under a sustained violin top note, the group tight as a unit as they were to be throughout.

Alex Ross’s book, The Rest is Noise, argues that Schonberg was the real revolutionary in C20th music and that Stravinsky only looked like one. However, the Three Pieces for String Quartet, are convincingly fragmented and disembodied like modernist counterparts in other disciplines, like The Waste Land, Les Desmoiselles d’Avignon, perhaps. The first movement makes reference to The Rites of Spring which had caused such consternation not long before, the cello gently percussive in a violin-led Danse. Excentrique possibly gives away its intention to be so in its title because for a composer like Ligeti it would have been perfectly normal, and then the Cantique was bleakly funerary. I trusted that a couple of ‘noises off’ were accidental and not a further step into avant-garde performance. One wouldn’t always be sure with some composers but we’ll allow Igor that much.

Nikolai Medtner is important to Elena and she’s doing a fine job in promoting his music because without her I’d never have heard of him but now I’ve heard him twice. The Piano Quintet in C major, op. posth. took him 44 years to write which suggests it didn’t come easily. He’s a much more ‘late Romantic’ composer than Stravinsky or Prokofiev, this piece being dense with melody. It opens, gently expansive, with the quintet blending as one rather than any taking the lead. A more restrained, almost solemn passage with more flowing piano was pastoral without quite being Vaughan-Williams before some agitato before the piece flowed on a buoyant current to its big, but not quite as big as a Beethoven symphony, ending.

Either this group spend a lot of time together or they adapt readily to each other. In music that must have been demanding at times, it came out very naturally in performance.

Elena is back in the cathedral this evening on a programme with octagenarian beat poet, Roger McGough. Not necessarily playing together, I don’t know. Lily the Pink in the style of Shostakovich has yet to be attempted.