Erin on a High Note! 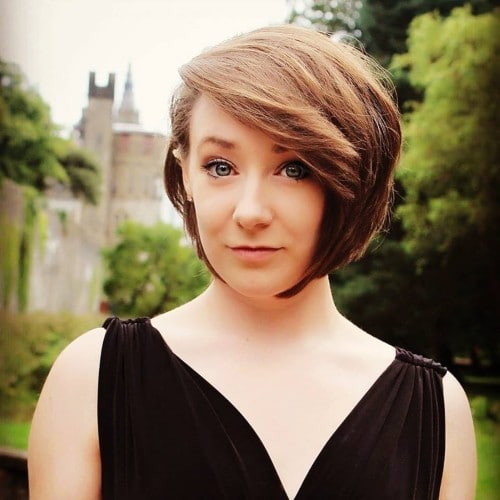 Chichester Music Group welcomed back Erin Alexander [soprano] and Nick Miller [piano] on 29 September to the Society’s first “socially distanced” concert at the University of Chichester, which was also live-streamed. This was a new experience for both the performers and the audience and, given these unusual circumstances, it was an enjoyable experience for all.

This concert was entitled “On a High Note”, which tells the story of soprano Graziella Scuitti (1927–2001), a contemporary of Maria Callas. Erin Alexander played the Italian singer, and she expertly maintained an effective Italian accent when in the role. Nick Miller was an adept interviewer and they both created a believable platform, as they developed the life of Graziella Sciutti.

Graziella Sciuitti’s stage career began in 1951 as she sang the role of Elisetta, the woman in The Telephone, which Erin performed with humour and skill, and then she sang songs from the characters that became Scuitti’s celebrated favourites, which during her career she performed over a hundred times each, Susanna, Despina, Rosina and Musetta.

The audience therefore enjoyed a wide selection of arias from Bach, Mozart, Verdi, Rossini, and Puccini. Erin Alexander’s performance was engagingly dramatic, and she sang with a very self-possessed vibrancy, particularly rising to the challenge of singing in the character of another opera singer. This was an extremely rewarding performance.

The accompaniment by Nick Miller was very supportive yet so buoyant that it led to a highly effective performance by both musicians. They are to be congratulated for producing a near to perfection performance both musically, as well as in the acting necessary to make the format of the evening believable. The small audience that was allowed was very appreciative.

At the short interval the Chairman of the Chichester Music Society, Chris Hough, explained that this concert was dedicated to Chris Coote, the Society’s Treasurer, who unfortunately had just tragically died after a short illness. He said, “This was a concert that Chris Coote would have loved. He was especially committed to the development of young, gifted artists and took a keen interest in our Charity and its work. Chris had many friends in the musical world, especially in the Chichester and Bognor Regis music scene. His financial skills as an actuary, and musical temperament gave CMS an excellent treasurer. He was a talented accompanist and a fine musician. We shall miss his wit, his friendship and expertise. Erin and Nick have produced a torrent of lovely music which we have all thoroughly enjoyed. They are to be congratulated.”

Erin Alexander then closed the concert with a poignant performance of the piece when she had first met Chris Coote at a Showcase Concert Competition. This was the competition which Erin had won. She said he was one of those rare individuals who always had time for her, was always ready to provide help and advice, and as she said “he was so generous, with his time, his love, his soul, particularly for all of us young musicians, and even offered accommodation at his home when she was performing.”