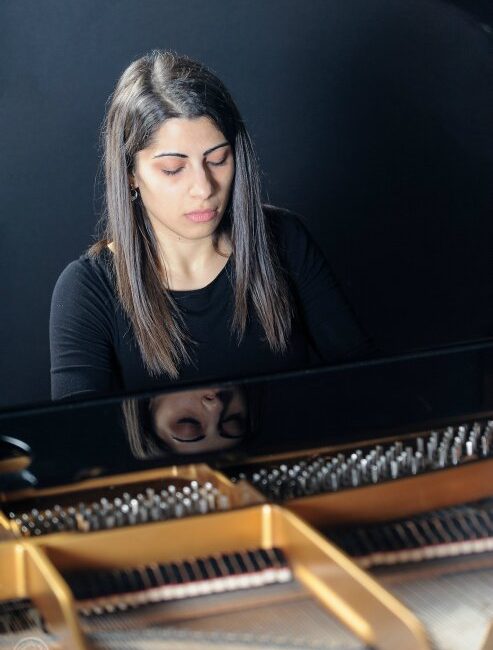 Admission is free with a retiring collection.

A lunchtime concert by Stavroula Thoma on Tuesday 8 March at 1.10pm

Movements from Sonatina for Piano by Mikis Theodorakis (1925–2021)

Stavroula Thoma is a Cypriot concert pianist who has performed across Europe. Visit her website.

Stavroula obtained her Advanced Postgraduate Diploma on Professional Performance at Birmingham Conservatoire with Distinction. She has released her first CD recording which is available to purchase at http://www.stavroulathoma.com/store/c1/Featured_Products.html
and as a digital download at http://cdbaby.com/cd/stavroulathoma3

Stavroula also enjoys playing chamber music. She was a member of the ‘Satori’ Trio (piano, flutes: Ami Lodge, Nicola Tagoe) and was coached by the Barbican Trio. She has also performed in recitals with violinists, Angeliki Casdas, Peter Foskolos and Maria Oguren and was coached by internationally renowned chamber musicians such as Christopher Richter, Nathaniel Vallois and Oliver Wille.

Stavroula was critically acclaimed for her performances of the mono-opera ‘The diary of Anne Frank’ with ‘About Turn Theatre’ and sopranos Polly Ott and Vera Hitbrunner at Edinburgh Fringe Festival.

She has been a Concordia Foundation Piano Artist since 2016 for which she performed solo recitals at St James’ Piccadilly Church and Mcmillan Cancer centre in London.

Composition is one of her special interests which is depicted in her published work ‘Dewdrop’, (by Aktis) a fairytale by Panayiotis Thoma for which she composed the background music and songs.