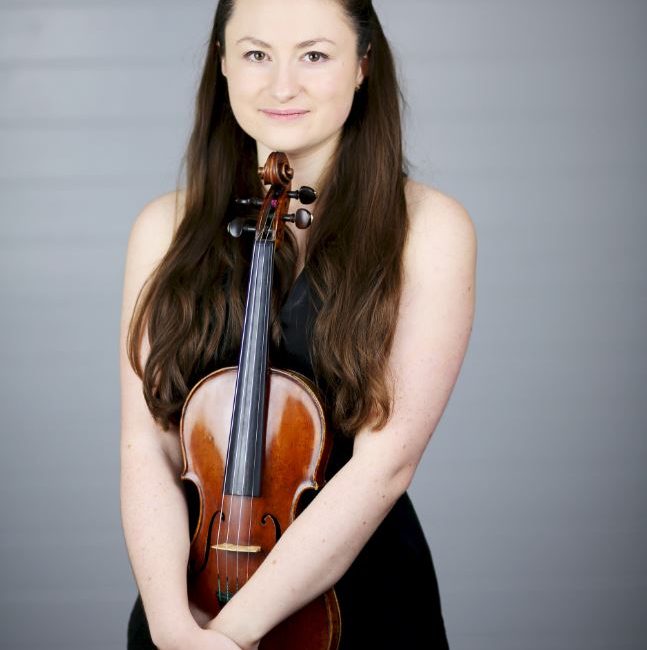 This concert is dedicated to HCO’s memories of Brian Howells, Leader of HCO from 1997 to 2020, as a celebration of his huge contribution to the orchestra, sadly cut short by Covid-19 in April 2020.

The recent pandemic has touched everyone in different ways and members of Havant Chamber Orchestra were devastated to hear of the death from Covid-19 of Brian Howells who was leader of our orchestra for 23 years. Our first concert in this new season pays tribute to him whilst also celebrating the fact that we are once again able to perform live concerts as we did before.

In tribute to Brian, HCO will play the short piece for strings “Crisantemi” by Puccini which we performed, at Brian’s suggestion, at Emsworth in 2017.

We’ve also chosen the Sinfonia Concertante by Mozart in which Brian was himself the violin soloist back in February 2013. We will proudly remember him whilst thrilling to the performance of soloists Laura Rickard and Elliott Perks. Local music lovers may recognise violinist Laura as a former leader of the Hampshire County Youth Orchestra and Artistic Director of the Romsey Chamber Music Festival, which she founded in 2018. Elliott is a former student of the Yehudi Menuhin School and Royal College of Music with a busy performing career as a violist. We’re sure you’ll love this dynamic duo!

Surprisingly, we have not performed Holst’s St Paul’s Suite before – it’s a light, tuneful and popular piece for strings which we know you will enjoy.

Finally, a Symphony by Mozart that we last played in 1975! His Symphony No. 33, written when he was just 23, is a delightful and joyful way to end our concert.

British violinist Laura Rickard studied at St John’s College, Cambridge and the Royal Academy of Music and now enjoys an active performing career as a soloist and chamber musician. She has recently performed concertos by Beethoven, Tchaikovsky, Elgar, and Sibelius and she gave her international debut with the Michoacan State Symphony Orchestra. Recent highlights include performing as a soloist at Royal Festival Hall, the Purcell Room and giving the world premiere of Robert Peate’s Concerto for Violin and Double Orchestra in 2018. As a founding member of the Mila Piano Trio, Laura has performed at major venues around the UK and further afield. Recent successes include winning first prize at Verao Classico, reaching the finals of the St. Martin-in-the-Fields competition and performing at St. John’s Smith Square. In demand as a chamber musician and orchestral principal, Laura is regularly invited to play at festivals including Winchester, Montesinho, San Miguel de Allende, Atlantic (USA) and Presteigne.

Laura has a keen interest in historical performance, she studied baroque violin with Nicolette Moonen and she regularly performed with the Academy Baroque Soloists, including on a tour with the Juilliard School and Rachel Podger. More recently Laura has toured Europe and Asia with the Orchestra of the Age of Enlightenment.

Laura is the Artistic Director of the Romsey Chamber Music Festival, an annual festival which brings international artists to her home town, provides a busy education programme which has reached over 2000 children in Hampshire, and commissions young emerging composers. Laura is especially grateful to Arts Council England which has enabled RCMF to continue working throughout the pandemic.

Laura completed her Professional Diploma at the Royal Academy of Music in 2020 which was generously funded by the Academy and the Craxton Memorial Trust and was awarded a DipRAM for an outstanding final recital. She has recently been appointed as the Meaker Fellow in Violin at the Academy.

Elliott grew up in Surrey, where he was home-educated with his siblings until the age of nine. In 2001 he was awarded a place at the Yehudi Menuhin School, where he studied with Suzie Meszaros, Rosemary Warren-Green and Loutsia Ibragimova on the violin until 2008, when he changed to first study viola. Elliott was a foundation scholar at the Royal College of Music in London where he studied with Andriy Viytovych.

On graduating from the RCM, Elliott joined the Maxwell String Quartet with whom he won both First Prize and Audience Prize at the Trondheim International Chamber Music Competition in 2017. Since then the quartet has toured internationally, including the Amsterdam String Quartet Biennale, Stavanger Festival, Trondheim Chamber Music Festival, Schiermonnikoog and Wonderfeel Festivals in the Netherlands, Lammermuir Festival and Music at Paxton in Scotland. Its debut tour of the USA in January 2019 garnered critical acclaim from the New York Times (“eloquent performers who bring the same sense of charisma and sense of adventure to their programming”), and performing to sold out venues in New York, Florida, California and Washington. They have since played in over 30 states. The two CDs released by Linn Records, featuring string quartets by Haydn alongside the quartet’s own compositions, based on Scottish traditional folk music, received glowing reviews from international press.

Elliott has taken part in numerous concerts as a soloist and chamber musician, performing in numerous venues around the UK, including The Wigmore Hall, The Royal festival Hall, The Royal Albert hall, The Queen Elizabeth Hall, The Purcell Room, Sadlers Wells, Bradford Cathedral, Snape Maltings, Dorking Halls, The Cadogan Hall and several concerts in the Menuhin Hall. Whenever possible, Elliott joins forces with his siblings Oscar and Ursula to perform under the banner of ‘the Perks Ensemble’.

In 2018, Elliott released his first album, ‘Marchenbilder’ with guitarist, Tom Ellis, which features transcriptions of music by Schubert, Schumann, Wolf and Tchaikovsky, themed around Germanic text. This music was later toured with the Images Ballet Company, with Elliott involved in the choreography process working closely with Jennifer Jackson.

For the past eight years, Elliott has enjoyed developing his career as a teacher, working with Violin and Viola students at the Yehudi Menuhin school alongside Chamber Music coaching.

Elliott plays a J.B Vuillaume viola from 1852, on loan from a very generous benefactor, to whom he is incredibly grateful.