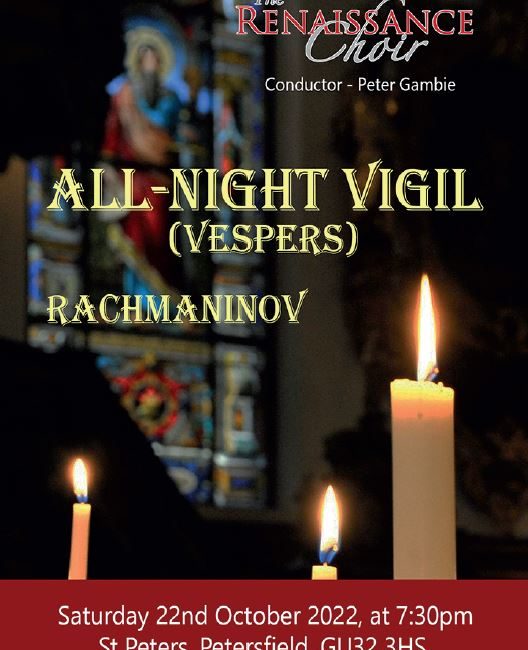 Rachmaninov’s “All Night Vigil” (more commonly known as his Vespers) is rightly regarded by many musicians as being the finest example of Russian sacred music. Written against a backdrop of political uncertainty in his homeland as the Bolshevik revolution was in its infancy and when World War I was at its most destructive, it contains an astonishing serenity, tranquillity and peacefulness. Did Rachmaninov write the work as a protest against the destruction around him? Did he fear the removal of the old guard of his fatherland and its replacement by a different form of totalitarianism? Did he see it as his act of penitence on behalf of a species seemingly hell-bent on destruction and death? We shall never know his motivation since little is recorded about the processes and intentions behind its construction.

Its serenity comes from the plainsong on which the entire work is based. Western European Renaissance composers such as Palestrina, Victoria and Byrd based most of their sacred music on plainsong, just as their predecessors had done. Eastern Europeans had to wait until Rachmaninov for this method to flower in such an intensely beautiful fashion.

A different inspiration in the work is found in the composer’s fascination with bells. We are familiar with the onion-shaped bell towers of the Kremlin, but these represent a fraction of a structure found across Russia. Unlike Western Europe’s tuning of bells into major scales, there is little homogeneity in the types of bells in Russia. There are towers with a small number of high-pitched bells; others have a single, deep-tolling bass bell; some have five well-tuned scales, and others defy classification. All around, Rachmaninov had bells to fascinate his imagination and to use in his music. There are many opportunities to hear these effects in the Vespers, which help to produce a soundscape that is irrefutably Russian.

Rachmaninov’s sacred choral masterpiece was composed in under 2 weeks in 1915 to benefit the Russian war effort. It is the setting for the important rite of the Orthodox Church, the office of Vespers, the sunset evening prayer service (also known as Evensong). It is hugely loved by singers: it uses a joyful arrangement of Slavonic vowels and clusters of consonants that convey the meaning of the words. It is challenging to sing!

Its movement No.5 descends to the third B-flat below mid-C. Rachmaninov disagreed that Russian basses capable of it were as rare as asparagus at Christmas. “I know the voices of my countrymen and what demands I can make on Russian basses!”

It was recorded for the first time only in 1965 in the USSR just for export, because of Soviet anti-religious policies. Wikipedia provides further info: http://bit.ly/1FK8pIW The Renaissance Choir
The Renaissance Choir comprises around 34 singers that puts the beautiful music of the Renaissance period at the heart of its repertoire.
Event Details
0
Add to Calendar
We use cookies on our website to give you the most relevant experience by remembering your preferences and repeat visits. By clicking “Accept All”, you consent to the use of ALL the cookies. However, you may visit "Cookie Settings" to provide a controlled consent. Read More
Cookie SettingsAccept All
Manage consent