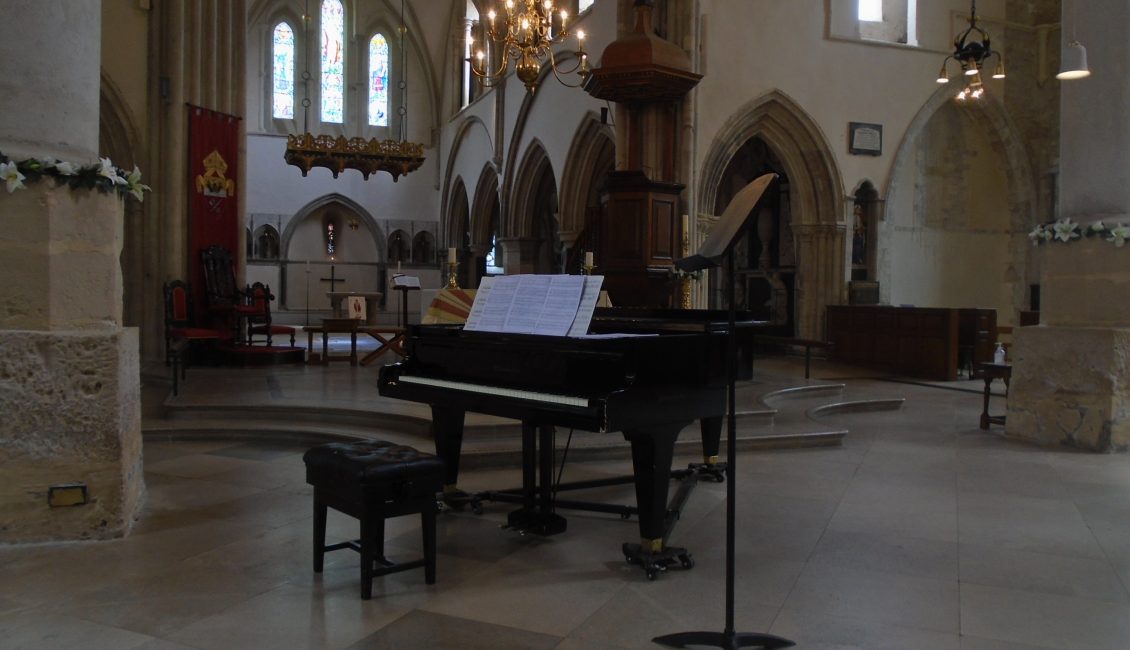 The sun shone, having no alternative, on the nothing new. I had to admit, I’d run out of opening lines from famous novels to adapt in concert reviews and so, unrelated to the violin and piano concert by Fumi Otsuki and Sarah Kershaw, we end with Beckett, Murakami not having anything remotely suitable to offer.

Something of an innovation today was a few seasonal lines of Ted Hughes to read alongside the music, the ‘soft excitements’ of Hughes in one of his gentler moods perhaps being the relevant words to link with the programme.

Parry’s restful, elegiac song in the Andante from his Violin Sonata in D was such a thing and the Cavatina by Joachim Raff was similar if becoming more impassioned and Fauré, who has been doing well in lunchtime concerts recently, completed a section of C19th music with a late Romantic Sicilienne.

The tempo quickened for the Allegro from Schubert’s Violin Sonata, D.384 with its lively games on Fumi’s fretboard and Sarah implying she’d make a good job of any Mozart in the accompaniment. In an odd misattribution, the following Sicilienne in E flat major was once thought to be by Maria Theresia von Paradis, a contemporary of Mozart’s, but has since been awarded to Samuel Dushkin who came 150 years later.

Possibly the highlight for me was a Melodie from Gluck’s Orfeo and Euridice. While it’s hardly for me to feel sorry for a talent like Gluck, I don’t think he’s as famous as he should be on the back of two wonderful operas and more so this was a most welcome outing for a piece where the baroque can almost be heard becoming ‘classical’.

Entirely different, we were brought right up to 2021 and, I’m sure, the most recent composition I’ve heard, with Fumi’s own Piano Sonatina no. 1, played by Sarah. Two movements of staccato, the first successfully hiding Vaughan-Williams’s Lark from me, led to the more fluid and rolling third which paid different homage to V-W. I found out that the Sonatina no.2 is in the process of being written or else there would have been no need of this being no.1.

Having been delivered to the landscape of Gloucestershire by a circuitous route, Herbert Howells’s Pastorale brought us back to the folk song we had begun with and those undulating meadows of farmland, birdsong and nostalgia and that’s where Fumi and Sarah left us, with a gorgeous Spurn Point by Vaughan-Williams which might well be Yorkshire’s answer to Land’s End but compares with his Lark Ascending, the difference being that while the lark eventually disappears from us, this doesn’t quite.

It was a beautifully conceived programme given with sincerity and sympathy, deserving of a bigger audience than it got but that is for those who weren’t there to regret. There was nowhere better in Portsmouth to be.