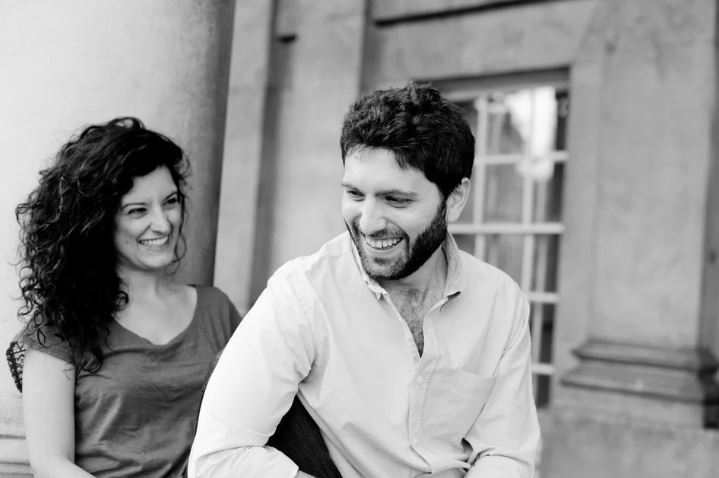 Guilia Semerano and Filippo di Bari began preparing their four-handed Pagine di guerra by Alfredo Casella before Putin’s sinister intentions were made obvious. They became appallingly relevant in performance, as in Chichester today.

In four short movements, it moves through the rumbling, threatening parade of the heavy German artillery, the grave desolation before the ruins of Reims cathedral, and the thundering crescendo of charge of the Cossack cavalry, all of which established that the piano is rightfully a percussion instrument, before the lilting anxiety of wooden crosses which had something of the bleakness of Shostakovich about it. Not easy listening, but vividly of the moment. Guilia and Filippo don’t appear to be an act willing to compromise.

Six épigraphes antiques are Debussy in his more avant-garde mode, light and pastoral invoking Pan, ‘god of summer wind’, before the crepuscular For a nameless tomb, some fractured twinkling suggested by the title In order that the night might be propitious. My faded French never did include ‘crotales’ which I find to be ‘antique cymbals’ in Pour la danseuse aux crotales and we drifted dreamily towards greater intensity in To thank the morning rain.

Guilia is, more or less, the rhythm section seated on the left and Filippo takes the top notes and much of what melody there is, and there was more in Schubert’s Allegro in A minor, D.947. Written in the last year of his life, which was only his 31st, we might retrospectively interpret it as a ‘rage against the dying of the light’ but it’s likely he knew, too. After the imperious opening, a life-affirming tune emerges. There’s a lot going on in the four hands busy on one resilient keyboard and we can equally wonder what Schubert would have done given another 30 or 40 years developing from where he was with that as we do with what might Mozart’s Symphony no. 75 been like (Beethoven 7, maybe !!).

One never tires of, or apologizes for, repeating praise for the standard of Chichester’s programme and Guilia and Filippo belonged there. The programme for September to November is already in place and is bound to ensure I continue to shuttle back and forth on the no.700 bus on an almost weekly basis.