Havant Symphony Orchestra at 60: interviews with some of its longest-standing members 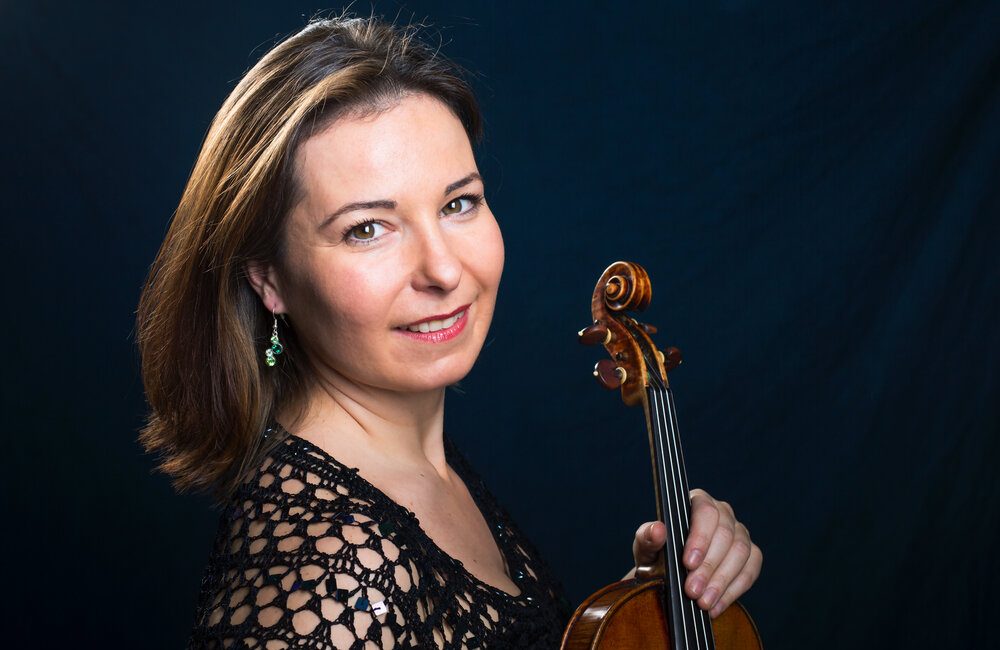 At 7.30pm on 2 July at Oaklands Catholic School, HSO will be celebrating its 60th anniversary with orchestral favourites The Sorcerer’s Apprentice by Dukas and Rachmaninov’s Symphonic Dances. Joining the orchestra will be soloist Melina Mandozzi to perform Tchaikovsky’s Violin Concerto in D major. (Image credit of Melina Mandozzi: Magnus Skrede).

Havant Symphony Orchestra’s first public concert was given on 27 July 1962 with musical director and conductor Peter Craddock at its helm. The first concert was a joint effort with Havant Choral Society and featured music by Handel, Delius, Warlock and Haydn.

Peter Craddock was a force of nature and directed the orchestra for the next 50 years until ill health forced him to stand down in 2012. Under his stewardship, the orchestra hosted guest conductors such as a young Simon Rattle in 1975 and instigated the Bob and Beryl Harding Young Conductor Bursary in 1987, witnessing the careers of bursary holders Mark Wigglesworth, Rumon Gamba and Sarah Ioannides among others, burst onto the international stage.

Performing alongside the orchestra have been a plethora of soloists including violinist Nigel Kennedy, cellists Julian Lloyd Webber and Richard Harwood (who originally hailed from Waterlooville), and more recently horn player Ben Goldscheider, pianist Florian Mitrea and trumpeter Zöe Perkins.

On the occasion of the orchestra’s 60th anniversary, Helen Taylor (Publicity Officer for Havant Orchestras) interviewed some of HSO’s longest-standing members during rehearsals one evening at Pallant Centre in Havant on the occasion of this remarkable milestone.

The questions she asked them were:

I joined in September 1969 having been approached by Peter Craddock, who at the time was Head of Music at Havant Grammar School, when I came for an interview to be Head of German.

In the early days we rehearsed and performed in the Grammar School hall. On concert days Peter sat at the door taking the money until it was time to come in and conduct. The hall was always packed.

I have lots of memories, but in particular I can’t forget sitting with Eleanor Fricker on the front desk being conducted by a 19-year-old Simon Rattle for a term.   I also remember arriving for the final rehearsal for a performance of Beethoven’s 9th Symphony at Oaklands Catholic School we discovered that the stage was taken up by the set of the school production of Romeo and Juliet. In the concert the choir was scattered through the set and the soloists sang from Juliet’s balcony.

HSO is very special.  I love the people, the music we play and the standard we achieve. Even after all this time it is wonderful to be performing works for the first time.

My only concern is the size of our audiences, we now have to work even harder to get audiences back following the Covid hiatus. I do hope we can continue to perform demanding and attractive programmes to a high standard.

I joined the year I started teaching 1976 in order to hopefully maintain my own playing standard, having been first aware of the Havant Symphony Orchestra while still at school when I saw HSO music on my teacher’s piano and wondered if I might be able to play music like that one day. (I am still wondering!)

Peter Craddock was always very good at making sure that when playing a concert our volume was such that the soloist could be heard, I think it was Iona Brown who played the first few notes of the Mendelssohn Violin concerto stopped and said, “if you can’t hear me then YOU are too loud” boy oh boy did Peter smile!

One of my fondest memories is that when we were playing the Gershwin piano concerto when the piano stool had gone missing so the soloist used a plastic chair and looked very laid back and relaxed, great for a jazzy piece, made me feel there should have been a beer can on the piano.  The performance of Nielsen’s 5th Symphony is a favourite concert because the symphony is very special piece in the first place and I love it and after the performance you feel you really have played something.

I still play in the orchestra for the reason I first joined and because I like it, particularly as our conductors are good at finding interesting pieces to play that are not heard as often as they should be.  Going forward into the future what I would like to see more people in the audience, more children’s concerts, and also young players joining the orchestra.

I joined the orchestra in January 1976.  I had moved to Hampshire in October ’75 and asked the first musician I met what orchestras there were locally.  She recommended either Havant or Southampton and I decided to go to a concert given by each of them before deciding.  The first half of the December ’75 concert was conducted by the student conductor then working with the Bournemouth orchestra – Simon Rattle!  I went to find Peter Craddock afterwards and was “in”, and didn’t bother going to Southampton.

I particularly remember, probably in the mid-80s, the first time we played the Malcolm Arnold 4th Symphony and the percussion only came to a rehearsal about two weeks before the concert. We were all gobsmacked when we heard them for the first time. I also remember playing Nielsen’s 5th Symphony.  A lot of members didn’t’t like it at all and some refused to play it but one very elderly cellist, Dorothy Ellison, having missed the previous concert because of a broken hip, was determined to be back in time to play in this one.

I have always been a member of an orchestra since I was a teenager and can’t imagine not being in one. When I was head of music at Portsmouth High School, parents used to wonder if it was worth going on paying for music lessons for their daughters when they were never going to be professional musicians. My answer was always yes!   When my children were young, most people knew me as either “his wife”, or his or her “mother” and even on one occasion someone recognised me as the “person who walked a red setter up the road”, but when I was at orchestra I was me and no one cared about the rest of the family, and I think that was the only thing that kept me sane during that period of my life!

I think HSO is probably the best orchestra I’ve played in and it has also introduced me to many good friends. I just hope it keeps on going!

I joined Havant Symphony Orchestra in September 1976.  I have kept most of the programmes since then, which make interesting reading.  I sat near the back of the second violins for some years and remember my first concert as leader of the seconds in the early nineties and feeling scared to death of Beethoven’s 5th and its rather exposed entries, especially with Peter Craddock our conductor glaring down at me!

A special memory is when my son, then aged seven sat next to Nigel Kennedy during the afternoon rehearsal in 1985. I still have a signed LP of his. Other memories, birthday surprise for Peter when we played A Shropshire Lad as he raised his baton.

As I wrote in a card for Peter some years ago, playing in HSO has kept music alive for me over the years, so important to me amidst family and career commitments.

I still play with HSO as it’s fun and musically satisfying. I enjoy the challenges involved in working towards concerts and am pleased to play my part in sharing this with the listener. It also gives me a reason to practise too.

I would love to see the HSO survive into the future, but I do worry that the orchestra will struggle financially without adequate audiences and funding support.

I joined the orchestra in 1984 after finishing my long career in the Royal Marines Band, having heard about Havant Symphony Orchestra from friends who were members.  When I joined there were four trombones, but after one concert Ray Carter who was a long-time member left.  We have had some excellent soloists in particular Nigel Kennedy who came along to perform the Elgar violin concerto.   When I first joined, we were playing at Oaklands Catholic School, but due to size of our audiences we moved to Ferneham Hall in Fareham, which unfortunately was not great for acoustics making it hard work as a brass player.

I also play in the Royal Marines Association band but I have always loved the orchestra and we have played many memorable concerts over the years. I hope the music scene will continue despite the recent disruptions by covid.