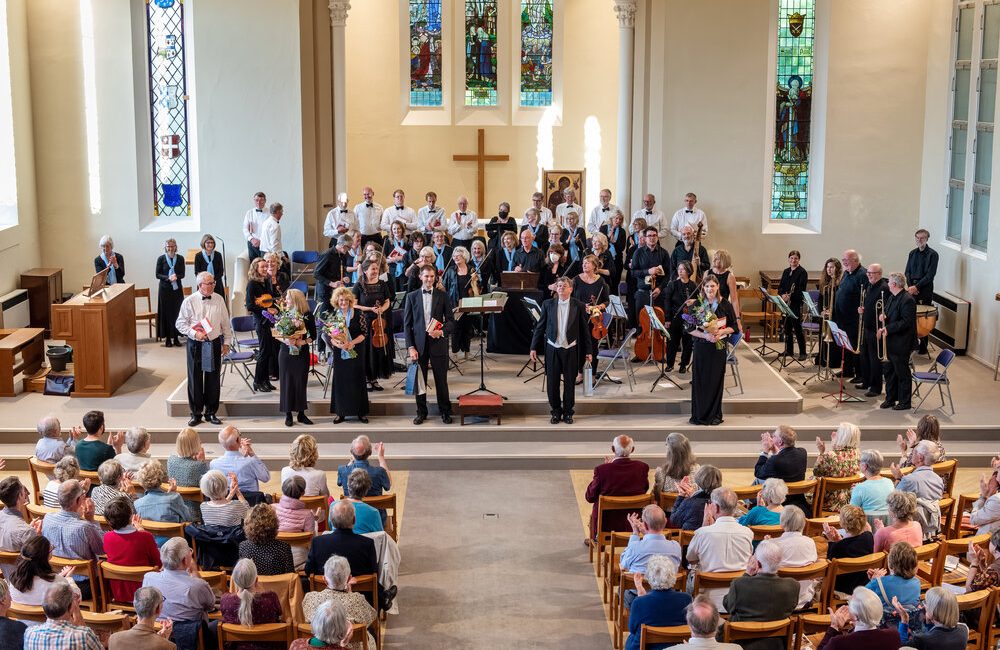 Not everything Handel wrote was an immediate success. Israel in Egypt was rested after only its third performance in April 1739 but it survived until now, not only as relevant to a time of the displacement of people but as a vivid display of choral writing and performance.

The Exodus set in the first half is a rich catalogue of the plagues visited on Egypt, equally pertinent to our times but made more entertaining by Handel’s orchestration. After the Consort of Twelve’s Prelude, Ed Hastings, a merciful saviour at the last minute when the tenor as billed lost his voice, introduced the premise that the Israelites are ‘afflicted with burdens’ under a new Pharaoh. Before parting the Red Sea to facilitate the escape of the Israelites, God turns the waters to blood, with some ferocity in Ed’s account.

Andrew Round’s lithe alto aria brought the plague of frogs so abundant that they found their way ‘into the king’s chambers’, plagues not recognizing class distinctions as we now know. ‘All manner of flies and lice’ and locusts were conjured by buzzing violins before the hailstones began peppering from the woodwind and then brass and timpani unleashed the full power of the chorus. The low strings completed these ‘special effects’ with their moody evocation of darkness, all of which suggested that if Handel was alive today he’d be making his fortune writing film music, probably in Hollywood and not in Brook Street, Mayfair.

With our refugee Israelites safely out of Egypt, the Red Sea is immediately unparted and the dramatic drowning of the pursuing Egyptians ‘overwhelms’ them and ‘there was not one of them left.’ It wasn’t very many years ago that I read somewhere that Moses himself wrote the Pentateuch but more recently I’ve understood that he probably didn’t but it’s a credit to its authors whoever they were.

Part Two, Moses’s Song, is one long celebration of how the Lord ‘hath triumphed gloriously’. Sisters Nancy-Jane Rucker and Pru Bell-Davies dove-tailed their flights of thanksgiving handsomely in their soprano duet before the tenors and basses, augmented by Malcolm Keeler, the sympathetic director, rather more stridently attested The Lord is a man of war. He’s not only that, he’s a successful one and triumphalist in a way that gentler, non-Old Testament liberals don’t find necessary any more.

What we can approve of less conditionally is the fine C18th sound made by the brass, led by Crispian Steele-Perkins, and particularly the woodwind.

Ed Hastings had no trouble picking up the tenor aria, The enemy said, from when he last performed it with some thrusting, baroque gymnastics and Nancy returned for Thou didst blow with the wind, suitably with low strings and woodwind and an airy character but, picked out in the detail, I thought, Liam Fleet on bassoon worthy of a special mention on an instrument not always in the headlines.

Melissa Wingfield’s alto aria Thou shalt bring them in was smoothly rounded and extended to a striking top note on ‘thy hands have est-ab-lish-ed’.

It was hardly the done thing to finish quietly or with understatement in Handel’s day. This might be religious music but it’s also show tunes. He moved into oratorios when the Italian opera he brought to England suddenly went out of fashion. Neither is it usually his way to forego a big, happy, glorious ending and, to be fair, he never lets us down. The chorus swells, the brass and timpani are back in action and the burnished exuberance of a last hurrah thrill as gloriously as the text from Exodus demands.

I’m thrilled by the triumph, less of the history written by the winners but by the talent, nearly all local, brought together by Malcolm to bring this account of Handel to the Chichester Festival. I’d been looking forward to it for a while. I knew it wouldn’t let me down and it didn’t.