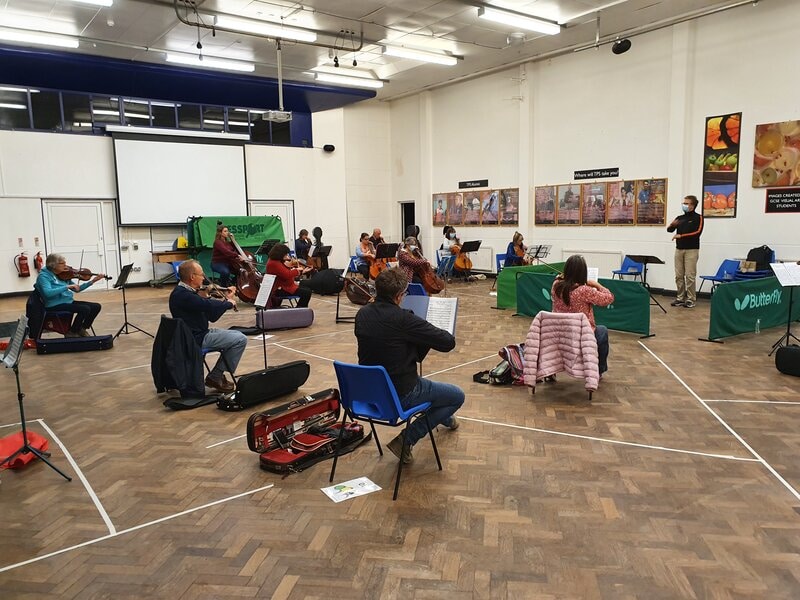 Anyone passing Petersfield School in Cranford Road last Friday evening would not just have felt the first chill of autumn in the air, they would have heard it, too. For the sounds of Autumn, one of Vivaldi’s famous violin concertos called the Four Seasons, were ringing out loud and clear from the Assembly Hall. After an unprecedented six-month break caused by the coronavirus pandemic, Petersfield Orchestra is back in action: if not quite in full swing, then at least, and at last, allowed to rehearse.

Conductor Robin Browning praised his players for returning. “We know that the arts sector has been one of the hardest hit, in terms of morale as well as money. But we were all desperate to play the music we love. So it’s just great to be back!”

Socially distanced – no sharing of music stands – and taking every precaution – string players only, no-one blowing flutes, clarinets, oboes, bassoons or even their own trumpets – around 20 members duly assembled. Orchestra Chair Steve Bartholomew was pleased with the turnout and with the new venue. “I was not sure how many would be willing to come, especially as it is the start of a new season, with some people shielding, retired or having moved on. There is always room for new players – especially violas! And we were in a new hall: temporarily at least, as our usual home, The Avenue Pavilion which isn’t big enough to allow for distancing. I was thankful that Petersfield School could find room for us – a happy reminder that the Orchestra forms a real part of the local community.”

For the moment, no actual concerts can figure in the diary. But everyone hopes that performances as well as rehearsals will soon be possible, perhaps even before Christmas. With luck, Vivaldi’s Four Seasons along with much else will soon be entertaining Petersfield Orchestra’s loyal local following once again.

Any string players interested in joining should write to mail@petersfieldorchestra.org.uk.