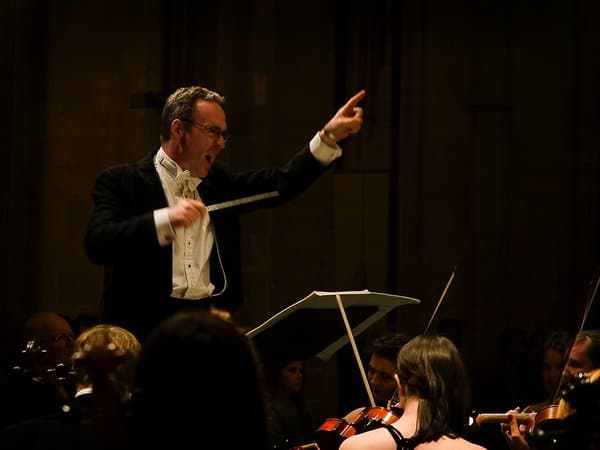 Concert preview: Crispin Ward and ​​Piers Adams with the Chichester University Chamber Orchestra on Wednesday 8 May.

Piers Adams is known as the ‘reigning recorder virtuoso in the world today’. He is one of the greatest recorder players of our age, recognised for his “astonishing, all-out virtuosity” (New York Times), breadth of repertoire and uniquely compelling style.

Crispin Ward is Senior Lecturer in Orchestral Studies at University of Chichester and Conductor of the University Chamber Orchestra. He’s made his name internationally as a horn soloist and principal, working with many inspirational musicians such as Piers. He takes up the story of their partnership:

“Having performed with Piers Adams several times, especially repeated performances of the Concerto for Recorder and Strings by David Bedford, Piers asked me to write a concerto for him. I had an understanding of his style, showmanship and romanticism so I had a head start as to the type of thing that he might enjoy playing. I was heavily influenced by the Bedford concerto and my piece is for the same forces but with a different setup, i.e. a standard string section.

“I was keen to give a nod to the recorder’s baroque and renaissance heritage, the golden era of recorder performance. In several sections I use older forms: for example, the opening is in an “Italian Overture” style with hints of the opening to Handel’s Messiah, the second movement is in a “Pavane” style and the third, although heavily influenced by Irish jigs and reels is also something of a concerto grosso.

“The movements and sections are named after stars in the sky because of my new-found interest in amateur astronomy and what each of them means to me or the emotions they seem to imply. It is also because of the star nature of Piers, one of the world’s foremost virtuoso performers.

“The most important aspect to this work is that I am trying to produce something that is fun to perform and to listen to. It is certainly tonal and melodic and written to make people smile.”

The Stellar Concerto for Recorder and Strings will be premièred at a performance by Piers with Crispin and the University Chamber Orchestra at the next meeting of the Funtington Music Group on Wednesday 8 May, along with works by Warlock, Ireland and Elgar.