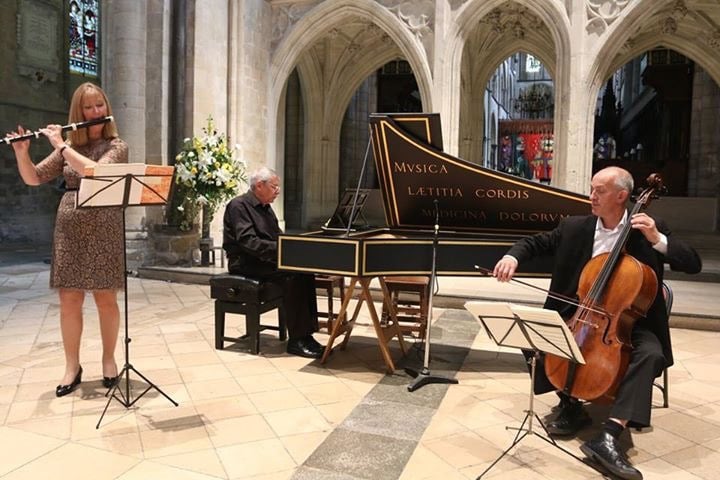 We are delighted that Continuum is returning to the University of Chichester on 12 January 2022. Since they last performed here, Continuum has been busy performing what had become an annual St Cecilia Day concert in Wells Cathedral, and they sorely missed performing there in November 2020. However, their last concert before lockdown was in February 2020 for the Totnes Early Music Society in Devon, where they performed an all J. S. Bach programme to a large and particularly appreciative audience.

Continuum are: Elizabeth Walker – baroque flute, Rachel Beckett – baroque flute and recorder, Sebastian Comberti – baroque violoncello, Michael Overbury – harpsichord. In this evenings concert devoted to the Music of J S Bach and his sons, they present a programme that includes two new arrangements by Elizabeth Walker of J. S. Bach’s Organ Trio Sonatas BWV 525 and 529, together with one of the most reliably attributed Trio Sonatas by J.S. Bach for two flutes and continuo, BWV 1039.

Elizabeth writes “we also include the beautiful smaller Trio Sonata, BWV 1038, also likely to have been composed in Leipzig in 1729, for a series of 500 concerts or more that Bach composed for at this time, and in which his pupils and his sons would have performed as soloists.

The six sonatas for organ “à Clav. E Pedal” are extremely beautiful but challenging to play for any organist. It is believed these sonatas were also compiled around 1720, written out by his son, Wilhelm Friedemann Bach and his stepmother, Anna Magdalena.

Johann Nikolaus Forkel (22 February 1749 – 20 March 1818), Bach’s biographer, commented:
“Six sonatas or trios for two keyboards with obbligato pedal. Bach composed them for his eldest son, Willhelm Friedemann, who, by practising them, prepared himself to be the great organist he later became. It is impossible to say enough about their beauty. They were written when the composer was in his full maturity and can be considered his principal work of this kind”.

It is not known exactly when Wilhelm Friedemann Bach wrote his youthful flute duets, but we do know that Quantz would have had them before 1741, because they appear in his book of ‘Solfeggi’ which Quantz compiled for Frederick the Great. Scholars have looked at the manuscripts and detected from the handwriting, that W. F. Bach could have written the first two duets as early as 1724, when he was still in Leipzig with his father.

Carl Philipp Emanuel Bach was the fifth child and second (surviving) son of J S Bach. He became an extremely influential composer working at a time of transition between his father’s Baroque style and the classical and romantic styles that followed. His personal approach, an expressive and often turbulent one known as empfindsamer Stil applied the principles of rhetoric and drama to musical structures. The manuscript Notebook was presented by J S Bach to his second wife in 1725, so C P E Bach was no more than 11 years of age when he composed these Two Marches and Two Polonaises. Simple, but well characterised, they shed an interesting light on domestic music-making in the Bach household.”