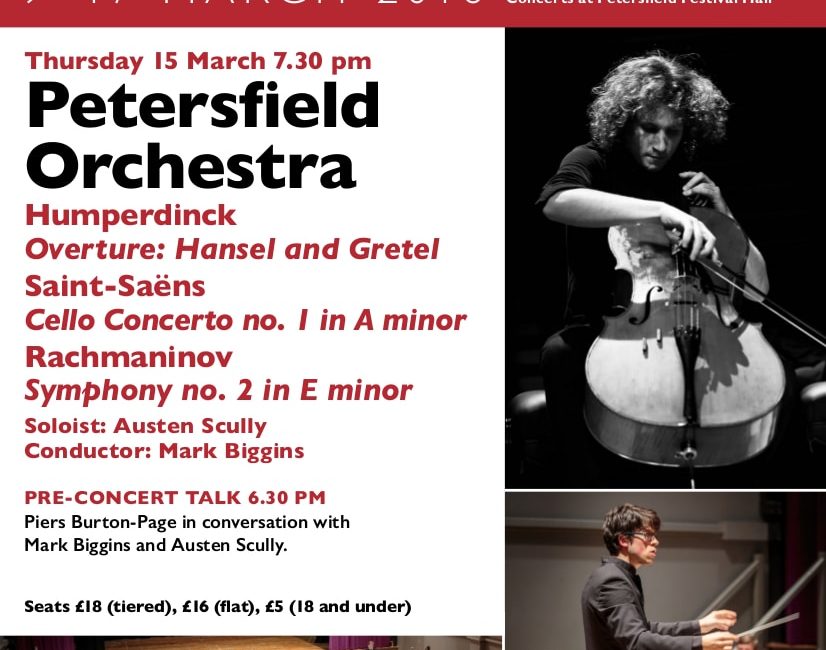 At Petersfield Orchestra, conductor Mark Biggins has now replaced Robin Browning, who after a dozen years at the helm chose to focus on his personal brainchild, the Són Project, a vision for a professional musical organization in Southampton. After a year-long interregnum, filled with auditions and trial concerts, Mark was established as Robin’s successor, and those present at his inaugural concert last November will surely have been impressed by his explosive Mendelssohn Overture, his dramatic rendering of a little-known Berlioz Cantata, and by his sweeping account of Dvorak’s Seventh Symphony, full of fire and nobility. What will the future bring? The members wait with bated breath ….

Meanwhile, Mark is about to make his first sashay into the arena of the Petersfield Musical Festival. Petersfield Orchestra has performed Rachmaninov’s Second Symphony before, in 1997 and 2005, and slowly over those twenty years this giant work has turned into a repertory piece, for both amateur and professional bands: a point worth mentioning, because there was a time when critics turned up their noses at it, as overly emotional and rambling; and partly as a result, conductors ran scared of its size and difficulty, insisting on cuts. It was André Previn who insisted, in a series of widely-acclaimed performances, that the composer be trusted to know exactly what he was doing! His First Symphony had been a disaster, a few years earlier: some say that the conductor, Alexander Glazunov, was drunk on the podium. Anyway, in order to write that work’s successor, Rachmaninov retreated from Russia to the comfortable surroundings of the then-beautiful city of Dresden, where he had friends and family, and produced a masterpiece. As will surely be evident, on Thursday 15 March, in the Festival Hall.

The concerto is the first of Saint-Saëns’s two for the cello. It is tempting to think of the composer as an ageing Frenchman left behind by the 20th century, but that would be unfair, and there’s a lot more to him than his evergreen Carnival of the Animals. It’s a little-known fact that he wrote one of the first-ever film scores! The concerto is a brilliant showpiece, brimful of tunes and excitement, and it demands considerable virtuosity: which will be doubtless be on display from the soloist. Austen Scully has regularly been guest leader of the cello section of Petersfield Orchestra for several seasons now, brought in on the day to offer guidance and cohesion. He is relishing the chance to step forward into the spotlight, as his solo career is increasingly taking off … he is just back from an arduous tour of China.

And finally, or rather to begin with, there is a wonderful name to conjure with: how would anyone like to be christened Englebert Humperdinck? He (the original one) was a fastidious German composer – who did not write vast amounts of music, but whose masterpiece is an opera, Hansel & Gretel, which has ensured Humperdinck’s immortality from the moment it began life as a Christmas family entertainment for his nephews and nieces. Mark Biggins kicks off Petersfield Orchestra’s Festival concert with the enchanting Prelude to the opera, and he, and it, will doubtless leave the Festival audience agog for what follows: literally, a witches’ brew of frightening forests, gingerbread ovens, all your worst fears of childhood – and of course a happy ending, like all the best stories, and concerts too.