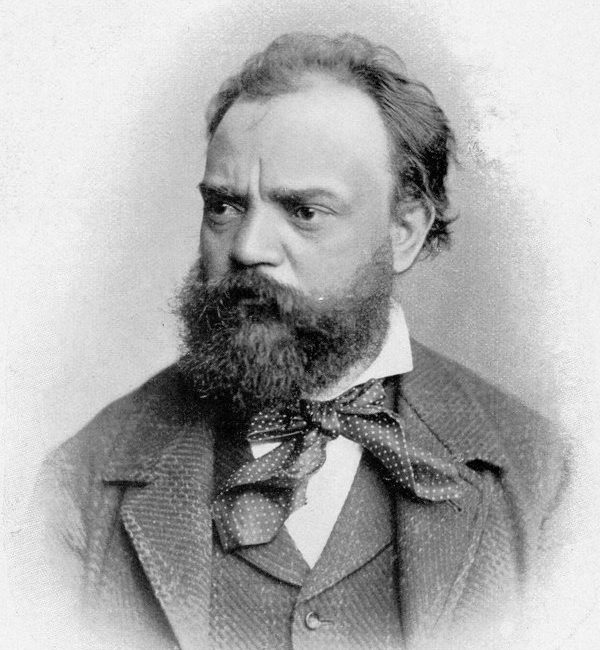 After the triumphant success of his Slavonic Dances the previous year, 1878, Dvořák was urged by his publisher Simrock to continue exploiting the same quasi-nationalist vein. The composer quickly came up with the present work, in which three of the five contrasted movements actually bear the name of a national dance.

The Czech Suite opens with a sonorous Prelude in D minor which is content solely to explore the gentle folk-like melody that is heard at the outset on the oboe, over an oscillating cello and bassoon accompaniment, and which then re-appears throughout the movement in a kaleidoscope of different colours. This movement is followed by a wistful Polka in D minor, complete with a contrasting middle section in the major key: in this movement, the interest here is largely confined to the string section. The third movement, like the Prelude, restricts itself to a single theme, in this case a Sousedská – a national dance rather like a minuet but often featuring a distinct ‘hop’ in its step. The fourth movement is a gently flowing Romance in compound triple metre, with the wind instruments, especially flute and cor anglais, much to the fore. Finally comes yet another national dance, a rapid Furiant: replete with off-beat rhythms and noisy interjections from the brass, this vigorous movement rounds off the Suite in almost symphonic fashion.

Dvořák’s Czech Suite was completed in April, and first performed in Prague the following month, on 16 May 1879.

Jean Françaix’s natural musical gifts were encouraged from an early age by his family: his father was Director of the Conservatoire at Le Mans, and a musicologist, composer, and pianist, his mother taught singing. The boy was only six when he began composing; his first publication, in 1922, caught the attention of a composer working for the publishing house, who steered him towards a famously gifted teacher, Nadia Boulanger. Françaix was also an accomplished pianist from an early age, earning a First Prize in Piano at the Paris Conservatory (his only formal musical qualification). But Jean Françaix’s primary occupation was his compositional career. He remained prolific throughout his life; even late in life he described himself as “constantly composing”, barely finishing one piece before beginning another, and continuing to do so until his death. He wrote over 200 pieces in a wide variety of forms and styles.

Many of his works feature the piano, particularly his numerous chamber works; but he wrote for nearly every orchestral instrument and standard ensemble. Françaix was a masterly orchestrator, reflected in his skilful use of tone colours. An avowed neoclassicist, he rejected atonality and other aspects of modernism. Françaix’s style is marked by lightness and wit (a stated goal of his was “to give pleasure”), as well as by a conversational style of interplay between the musical lines. It changed little throughout his career.

The great Swedish botanist Carl von Linné (1707-78), known as Linnaeus, spent decades in the field, studying anything he could find: animal, vegetable or mineral. In his 1751 work, Philosophia Botanica, he muses on the peculiar regularity with which some species of flowers open and close their petals at a certain time each day. He proposes (more as a thought exercise than as a plan for any actual device or installation) a Horologium Florae — a Flower Clock. Flowers would be set in a circle like a clock face, with each plant’s position corresponding to the hour it blooms. Then one could tell the time by observing which flower was open. Jean Françaix’s delightful work takes its inspiration from this idea.

Jean Françaix’s concerto-like work was commissioned by the principal oboe of the Philadelphia Orchestra in the USA, John de Lancie, who gave the first performance in 1961; it consists of seven short movements, moving continuously from one exotic flower – and time of day – to the next, as follows (original French title / Latin name), then the English vernacular equivalent:

5.00 a.m. (Cupidon Bleu / Catananche caerulea), Cupid’s Dart: now the tempo speeds up, the metre changes to five-four, and the mood is quite perky. The oboe begins and ends the movement with a short cadenza.

12.00 p.m. (Nyctanthe du Malabar / Nyctanthes arbor-tristis), Night-Flowering Jasmine: a lively Allegro with an accompaniment in rumba rhythm, this movement may be familiar (to those with long memories) as the signature tune for Robin Ray’s BBC music programme on midday Saturdays during the 1970s. The oboist duets regularly with the clarinet.

9.00 p.m. (Silène noctiflore / Silene noctiflora), Night-flowering Catchfly: Poco meno vivo, a little less lively than the preceding movement, the finale has the feel at times of a French folk dance.

Famously, once released from his long period of musical service to the aristocratic Eszterhazy family in Austria, Joseph Haydn enjoyed his new-found freedom He even felt able to accept an offer from the impresario Johann Peter Salomon in London for him to visit England, where his music had won many admirers. Haydn came twice, composing half a dozen new symphonies for each visit. For his second trip, in 1794/5, he arrived with the present work in his luggage: it had been finished the previous year while he was back home in Vienna, as it was due to be premiered just a few days after his arrival in the capital. The date was 10 February 1794, the venue, London’s Hanover Square Rooms, and the composer directed the proceedings from the keyboard.

In its winning combination of subtlety and simplicity, the symphony was very much geared to the taste and manners of London’s audiences: beginning with the ‘call to attention’ of the work’s opening loud chord. Jolted awake, the attentive listener might also have been aware of the presence, not just of trumpets and drums, but of some previously unseen newcomers in the orchestral texture: a pair of clarinets. The slow introduction to the opening movement uses these and the other wind instruments to explore some quite remote harmonic territory; and they are well to the fore, too, in the lively movement that follows. Then, G major comes as a surprise choice for the key of the slow movement, after the E flat of the Vivace. It has been suggested that Haydn was commemorating the loss of his close friend Marianne von Genzinger, a fine musician in her own right. Certainly the mood, though not tragic, has a certain ecclesiastical solemnity about it. This is broken in turn by the rustic simplicity of the Minuet, where Haydn needs to deploy considerable ingenuity to get back to E flat after the C major of the Trio section. The finale is pure joy, a cheeky rondo where the main tune is first treated to some energetic syncopation, and then even threatens to turn into a fugue. No wonder that this symphony was a favourite of that noted Haydn enthusiast, Sir Thomas Beecham!