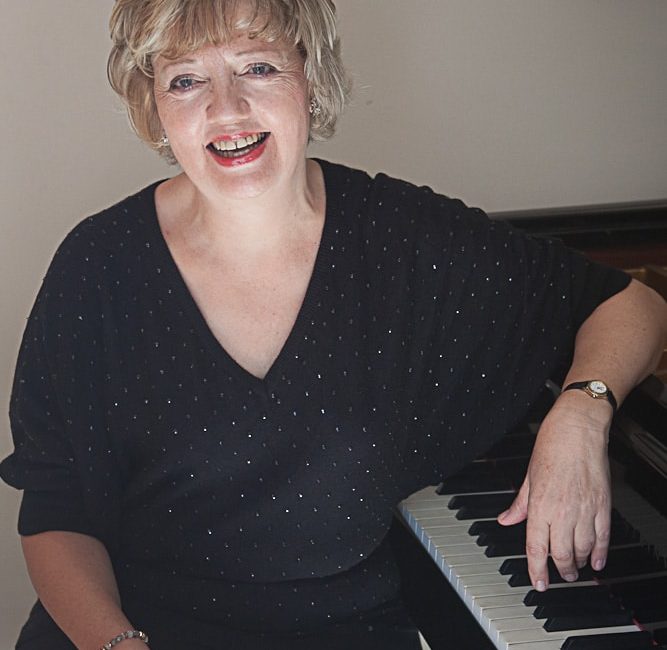 Angela Zanders was born in London and started piano lessons with her father, New Zealand pianist, Douglas Zanders. She went on to study at The Purcell School, Trinity College of Music and Goldsmiths’ College, University of London. She also won an Austrian Government Scholarship for study at the Hochschule für Musik, Vienna. At Trinity College, where she studied with Joseph Weingarten, Angela won many competitions and awards. She later studied chamber music with Murray Perahia, William Pleeth and Raphael Wallfisch.

Angela has performed all over the UK, including venues such as London’s Wigmore Hall, South Bank, St. Martin’s-in-the-Fields and at St. David’s Hall in Cardiff. She has broadcast for BBC Radio 3 and has given performances throughout Europe and in Australia and New Zealand, both as soloist and accompanist and as pianist in the Solarek Piano Trio, which she formed in 1992. For ten years Angela was accompanist at the Centre for Young Musicians in London. She does a great deal of freelance accompanying and has worked with many internationally acclaimed singers and instrumentalists.

Angela has been a lecturer at the University of Chichester since 2010 and is an adjudicator for The British and International Federation of Festivals.

Simon O’Hea is in conversation with Angela.

Who or what were the main influences on your decision to pursue a career in music?

I grew up in a house where my father taught up to 100 piano pupils each week. He was a wonderful musician and a great teacher and my mother, although an artist, was also very musical, so growing up with music happened naturally and there was never a point when I made the decision as such. A turning point was being sent to study piano with Vera Yelverton when I was 13 and two years later attending The Purcell School.

Who or what are the most important influences on your musical life?

Without doubt, my father, Douglas Zanders; my wonderful teacher, the Hungarian pianist Joseph Weingarten whom I studied with at Trinity College of Music, and the international concert pianist Murray Perahia. I was completely bowled over by his playing when he won first prize at the Leeds International Piano Competition – shortly afterwards I met him and was struck by his genuine humility, total lack of self-regard, kindness and willingness to offer help and support where needed. I was privileged to get to know him and to be given lessons and mentoring and it is true to say that the example of his playing and his approach to life and to music has been a major influence on my life.

What have been the greatest challenges of your career so far?

Remembering to believe in myself is definitely one. The music profession is incredibly high-powered and competitive, and it is easy to feel that one is battling against the tide. But, over the years, I have learnt to cultivate my particular strengths based on what I am passionate about, which is studying and researching every aspect of a piece of music and sharing this with others through performing, lecturing and teaching. The pleasure and fulfilment I get from this is immeasurable, and if just one person enjoys listening to music more as a result, I know it has been worthwhile!

One of my great pleasures is in playing chamber music. Being a pianist means working largely on one’s own, but if I am rehearsing or performing a chamber work I love with others I have a personal and musical rapport with, I am in my element. Listening to and trying out other musicians’ ideas on interpretation helps broaden one’s thinking and gives insights one might not have otherwise discovered. One of the main challenges is finding rehearsal times to suit all!

How would you describe your musical language?

I would describe my musical language as always trying to tell a story with the music. I like to draw people into the music I perform and I am always eager to share some background to the music with my audiences.

How do you work?

In studying a new work I want to find out everything I can about the music, the composer and when he or she composed it, the influences behind it and, as far as possible, to ‘get inside the composer’s head’. Every piece of music tells some sort of a story and I love the process of discovering what that story is about – through the composer’s directions, the harmonies, the tonality etc. and in trying to find out how and why the composer wrote the piece in the first place.

Which works/performances are you most proud of?

Ever since I was a child, I have adored Mozart’s final piano concerto in B flat major K595. I finally performed it a few years ago and it was a dream fulfilled. I was also proud to be able to give a lecture recital on Schubert’s Trout Quintet ending with a complete performance of the work with some wonderful musicians for the Petersfield Musical Festival a few years ago.

I have always adored Beethoven. I studied music at the Hochschule für Musik in Vienna and living for a year in the city where Beethoven (and Haydn, Mozart and Schubert) lived and worked was overwhelming – an experience which has shaped my whole approach to their music.

This is difficult to judge but I would say probably Beethoven and Schubert.

What is your most memorable concert experience – either as a performer/composer or listener?

Hearing the Lindsay String Quartet perform all the Beethoven quartets at the Wigmore Hall was an unforgettable experience, as was hearing Murray Perahia play all Chopin’s Preludes many years ago. Everyone was electrified. I also heard Horowitz play live – the most astonishing moment was when he played the National Anthem. I have never heard anyone play like that before or since. Such extraordinary power and authority coming from such a slight figure.

Only take up music as a career if you can’t live without it. If you’ve got something to say in music, believe in this and never allow yourself to be put down by people who say you can’t do it or that you’re not as good as the next person.

How would you define success as a musician/composer?

Being true to yourself, working hard and communicating through music.

What do you enjoy doing most?

Being with my son, being with my friends and colleagues and the process of communicating my passion for music to others in my recitals, lectures and classes.

Angela is holding a series of three lecture recitals entitled “Beethoven Enlightened” to celebrate the 250th anniversary of Beethoven’s birth, exploring the significance of Beethoven in Western music. With complete performances of some of Beethoven’s most significant piano and chamber music including ‘Moonlight’ Piano Sonata, ‘Kreutzer’ Sonata for violin and piano, Trio in B Flat Op. 11 for clarinet, piano and cello.