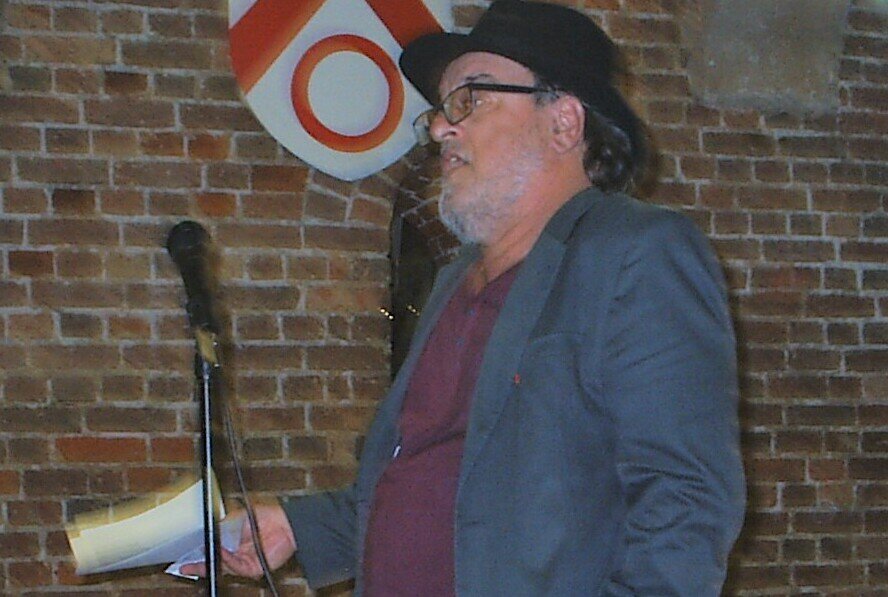 Who and/or what have been the most important influences on your interest in music and poetry? Tell us about your upbringing in this respect.

I think that, from quite an early age, composers were obviously important people. Mysterious, old-fashioned, mostly German men in wigs with unfamiliar names. I just knew they must be. There were records of the Hebrides Overture, 1812, the Karelia Suite and things like that among my parents’ records. Then Waldo de los Rios had a chart hit with his Mozart 40 in 1971, and the album of Symphonies for the 70’s provided some easy access to the real thing.

By about 1974 I had despaired of pop music by long-haired white boys taking themselves seriously in jeans and spent a year listening to Beethoven and Shostakovich. But I was hopeless at Music at school. We had a test where we had to write down the bar numbers at which the teacher stopped the first movement of Beethoven 5 and I scored 0/30. I missed the repeat of the opening bars and was immediately lost.

However, when the teacher asked what was ‘classical music’, he was offered all kinds of answers like ‘music for old people’, ‘played by people in posh suits’, ‘violin music’ and ‘not like the music on Top of the Pops’. I waited a bit before saying it was music from the second half of the C18th, like Mozart and Haydn. Of course, I gave up Music as soon as possible but my review of the school Choral Society’s Messiah was used in the local paper. Other enthusiasms have come and gone but music has been a constant.

I took any opportunity to do ‘creative writing’ from infant school onwards and had my first poems in poetry magazines when I was about 17. At first they imitated favourite poets like Roger McGough and then Thom Gunn, or I thought they did, and perhaps developed such as they did from there.

Tell us about your poetry. Is there any link to the music you like?

I like to think it’s ‘common sense’, probably with a debt to the likes of Larkin, Auden and more lately Sean O’Brien. That might be partly deliberate but one can hardly help it.

There are poems about Mozart and Buxtehude but mainly I like poetry to have a music of its own in its sound and rhythms. The link might be in some respect for decorum, some formality rather than any wilder excesses.

You state that your favourite music includes that written by Bach, Handel, Buxtehude, Tamla Motown, The Magnetic Fields, T. Rex, Monteverdi, Gregory Isaacs and Al Green. Can you tell me why you have a special empathy/affinity for these people (perhaps with special emphasis on the classical composers – the term “classical” has to be used loosely)?

We should probably add Mozart and Beethoven to that list.

I once read a tribute to Bach that said he ‘flattered us by being of the same species’ and he’s surely the best, which is a slightly different thing from favourite. Mozart, Handel and Beethoven complete the big 4. It’s something about the pre-Romantic discipline that can still be emotional without being self-indulgent.

Buxtehude is music’s equivalent of John the Baptist, who was doing what he did successfully until Jesus turned up and did it better. It’s the same with Buxtehude and Bach.

Tamla Motown is a catalogue of pop masterpieces made by a genius hit factory. Tony Visconti made Marc Bolan’s records way beyond how good they needed to be and Marc was a complete class act. Gregory Isaacs was reggae made chic for a British audience. The Magnetic Fields were a tip from a friend that kept me interested in pop music for longer than I otherwise would have been. Stephin Merritt’s songs are darkly ironic and heartbreakingly romantic at the same time. Al Green is the greatest voice, with Aretha, and represents what I decided was the much-preferred alternative to Pink Floyd, Queen and ‘rock’ music. These days it’s the likes of Dusty Springfield, Petula Clark and anybody who thinks Cliff Richard is uncool is trying too hard.

There’s no overriding principle involved. All you’ve got to be is any good.

Are you a performing musician?

No. I can’t even sing. I learnt a few basic chords on the guitar but struggle to string them together and can’t play anything with B major in it.  I think it’s the fact that I can’t do it and it’s all a mystery to me – I don’t know the difference between B flat and G minor – that makes me admire musicians so much.

I wrote a few songs but it was best if I did the words and a musician did the music.

Eventually, aged 58, I had a writing credit with my mate’s daughter who had her own band. Mama Told Me by the Jess Davies Band was very briefly no. 114 in the Amazon Download Chart. I was thrilled about that.

What were the most memorable concerts you’ve been to?

Many years ago I saw James MacMillan conducting the Bournemouth Symphony Orchestra with Evelyn Glennie doing his Veni, Veni, Emmanuel in Portsmouth Guildhall and more recently I saw Steven Isserlis perform three times with them, was always great.

Isata Kanneh-Mason doing her Clara Schumann in Southampton was spell-binding; Tasmin Little’s Naked Violin show in Portsmouth’s Square Tower was special and one of my favourite singers, James Bowman, has appeared in Portsmouth Cathedral a couple of times.

Way back, when Ensemble Clement Jannequin led to an interest in what was once called ‘Early Music’, and when we saw the Brodsky Quartet, they played something called Tenebrae by Osvaldo Golijov which gradually became Francois Couperin’s Lecons de Tenebres and which gave me a blissful moment when I recognised it.

Proms with Carolyn Sampson in the Monteverdi Vespers was ‘edge of the seat’ and compelling throughout and a Glyndebourne production of Handel’s Rinaldo was tremendous.

That’s turned out quite long for a shortlist. I always enjoyed a trip to Wigmore Hall but these days there’s plenty on locally and the journey to London is not quite so attractive. It’s been very useful to have Music in Portsmouth to find what’s on. Thanks very much for doing it.

Do you have any interest in contemporary ‘classical’ music?

Music has done well to recover from the horrors of what Pierre Boulez did to it in the 1960s. Things like Gorecki’s Symphony of Sorrowful Songs, John Tavener’s The Protecting Veil and James MacMillan’s intense Seven Last Words from the Cross have restored some sanity, and wonder, to contemporary music and Errollyn Wallen’s Photography disc with her Cello Concerto showed that the ‘mainstream’ continues to beat avant-garde experiments out of sight.

You regularly write about books, poetry and music on your ‘David Green Books’ website. Could you finally say a few words about it, so as to advertise it to any potential new readers?

It really began as a vehicle for my own poems but there weren’t really enough of them. Some might say there were too many. So it moved into book and poetry reviews, new CD’s and concerts. I had thought I was Portsmouth’s answer to Philip Larkin but now maybe I’m more like Neville Cardus.

It did have two features that guests could contribute to – Top 6, in which one picks a top 6 in any category you like and say a few words, and My Favourite Poem, similarly. It remains open to contributions. I’ll maybe look forward to your Top 6 choral pieces or Favourite Poem, and those of anybody else who’d like to join in.

Thanks for having me. It’s been a privilege. On behalf of the band, I hope I passed the audition.

David Green was born in Nottingham and lives in Portsmouth. His most recent book of poems was The Perfect Book (2018) and he writes about books, poetry and music at http://davidgreenbooks.blogspot.com