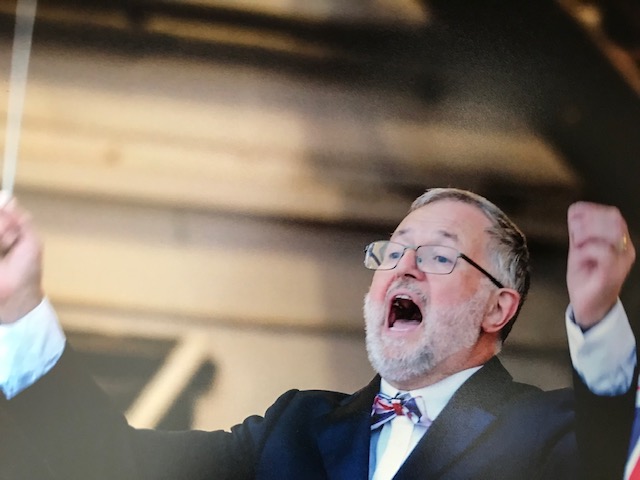 Who and/or what have been the most important influences on your musical career or interest in music?

The three most important influences that come to mind are:

Musical challenges have included singing a solo operatic part with Opera South, in Italian. I don’t speak Italian, and I’m an appalling actor! Another challenge was playing tuba with an Oom-pa-pa band on a ferry across the Baltic Sea – from memory, with only twenty minutes to learn the part! The third challenge that comes to mind was conducting the Portsmouth Philharmonic Orchestra and Portsmouth Chorus in Saint-Saens’ Organ Symphony. The complexity of the piece and demands of the frequent changes in tempo and time signatures turns the conductor into something like a plate spinner trying to keep all his plates in the air.

What are the particular pleasures and challenges of collaborating with other musicians?

I have met so many wonderful and kind musicians when playing and singing with others – people of all abilities who just have a love of music. I still constantly find new challenges when leading and participating in groups to achieve the best outcome possible, at whatever level they are working. Inevitably these days my technical abilities as a singer and player are gradually diminishing and increasingly I am happy to pass the baton on to younger musicians. I hope I am still able to enthuse players and audiences through conducting and coaching.

Are there any composers for whom you feel a particular affinity?

I have performed and listened with pleasure to music from Mediaeval to Avant-Garde, including Pop and Jazz on the way, and in the end I have formed the opinion that there are three types of music: good, mediocre and bad. I try to avoid mediocre and go for good – even bad can be interesting! I nominate Beethoven for his passion, Anton Dvorak for his wealth of tunes, Debussy for atmosphere, Chicago for their technical ability.

Which performances are you most proud of?

My favourite genres are oratorio and orchestral works. I was pleased with my performance as Christ in Bach’s St John’s Passion with the Portsmouth Baroque Choir. The part is technically challenging, exposed and pivotal in the story and took much thought and rehearsal. Another occasion that comes to mind was conducting an open-air Last Night of the Proms concert at Bucklers Hard, including all the usual pieces such as Elgar’s Pomp and Circumstance no. 1, Henry Wood Sea Songs and Land of Hope and Glory.

What are your most memorable experiences as a performer?

When I look back on performances that were most memorable, I think taking on the part of Elijah in the Mendelssohn Oratorio of that name when I was 16 was a defining moment, and rather less refined but no less important than taking my LRAM in singing at the Royal Academy of Music twenty years later.

If any of my pupils ever wanted to consider a career as a musician, I would do everything I could to make them reconsider. If I could put them off, then they probably would not have enough determination to get there. There are far too many actors and musicians who are working as waiters, and I have known a number of professionals who have not found happiness or riches on their chosen path.

How would you define success as a musician?

This can be answered in one of two opposing ways. If you get real joy from performing, at whatever level, then you are a successful musician. However, I was once told after singing to renowned teacher Nina Walker, ‘I really don’t care whether you enjoyed that or not, so long as your audience does!’ She had a point.

What is your most treasured possession?

It has to be my motorbike! It is a 750cc Norton Commando, which I bought new in 1972 and still ride today. It will be 50 years old in January.

Hugh’s musical training began as a chorister at Portsmouth Anglican Cathedral from the ages of 10 to 13. By this time he was at the Portsmouth Technical High School, where he was taught by Reginald Wassell, an inspirational teacher and musician. Whilst at school he began learning the trumpet, recorders and piano and was able to sing in annual oratorios including Britten’s St. Nicholas, Handel’s Messiah, Haydn’s The Creation, Handel’s Samson and Mendelssohn’s Elijah – in which he sang the part of Elijah. He was also a member of the Havant Symphony Orchestra and Portsmouth Youth Symphony Orchestra.

Whilst training to become a teacher Hugh took up the flute and tuba. A defining point in his training was visiting Hungary to see music being taught in schools using innovative techniques devised by Kodaly, and which he used later in his own teaching. In 1974 he not only got married but moved to Suffolk to take up his first teaching post. Whilst there he sang in the Aldeburgh festival and UEA choirs under Peter Aston. In 1977 he moved back to Portsmouth, teaching first at Great Salterns Comprehensive School, and later as head of expressive arts at Priory School. He sang in ensemble and solo with a number of choirs and instrumental groups including Opera South, Portsmouth Choral Union and Cappella, and started conducting an amateur orchestra, the Southsea Orchestral Society. He continued voice training with celebrated teacher Nina Walker and completed his LRAM and LTCL diplomas.

Over the years Hugh continued teaching and performing in the Portsmouth area and beyond. A memorable trip was playing tuba in an oom-pa-pa band on a ferry across the Baltic between Helsinki and Stockholm.

Hugh has two daughters and four musical grandchildren, and although now retired, still enjoys instrumental teaching and conducting. He has conducted the Zephyr Wind Ensemble and Portsmouth Chorus and now conducts the Portsmouth Philharmonic Orchestra, which over the years has raised over £15,000 for charity from their concerts. Apart from his love of music, Hugh is a committed motorcyclist and enjoys riding his Norton Commando, which he bought in 1972 and has ridden ever since.

The Portsmouth Philharmonic Orchestra’s next concert is on Saturday 26 March 2022, probably at the Church of the Resurrection, Drayton (to be confirmed).