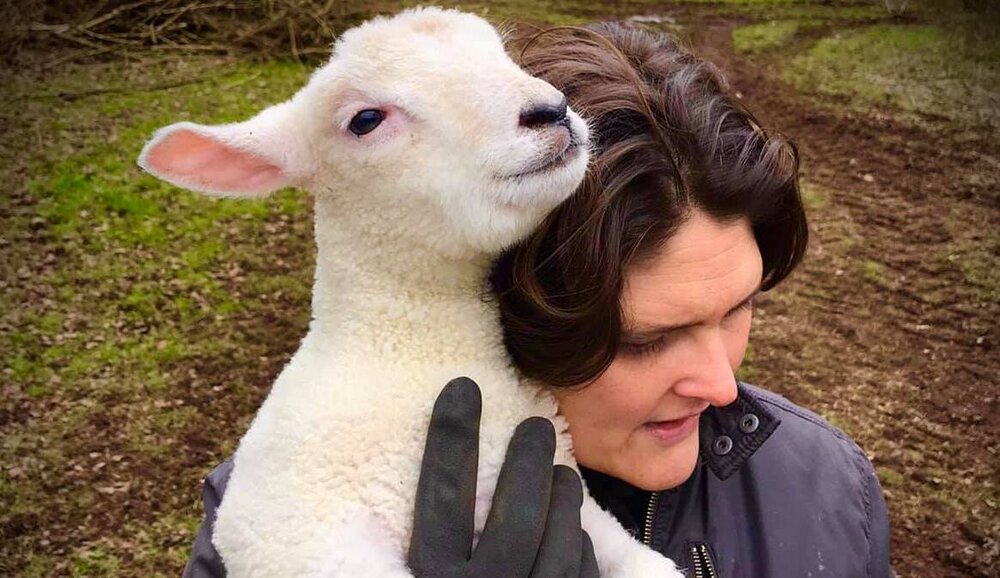 Teresa Barlow’s Requiem 2020 premieres at Portsmouth Cathedral on Saturday 21 May. Simon O’Hea is in conversation with her.

The hour-long choral work explores the prominent themes of 2020, from the outbreak of the Covid-19 pandemic to the increased prominence of human rights movements and climate change.

The work is performed by the Southampton-based BSO Voices community choir and members of Bournemouth Symphony Orchestra, along with a rhythm section, under the baton of conductor Pete Harrison.

Teresa says, “This time two years ago was a time of calm, where the world slowed down, goats roamed through Welsh villages and fish swam in the canals in Venice. It was a time of reflection, and inspiration came to me reasonably easily. I am a founder and run the Pear Tree Animal Sanctuary in Somerset, and at that time was spending a lot of time with my goats and other animals.

“At the height of the pandemic I noticed a strength of community and a united front I hadn’t seen before. That was greatly inspirational. And as I revisit the work, I increasingly feel that it continues to be relatable in many different ways— ultimately, this piece is about hope and unity, and I hope that listeners will experience this too.”

The work follows the pattern of the traditional Requiem Mass, a format that honours the dead and remembers those left behind. The texts feature a mix of original Latin settings and contemporary quotes translated by a Classics specialist.

Each movement of the work is dedicated to a theme from 2020. These include Kyrie Eleison – “nature have mercy”; Dies Irae (Climate Change) set to the words of Greta Thunberg; Tuba Mirum (Covid-19) following a morse cypher to the pattern of ‘Covid-19’, dedicated to those who have lost their lives during the pandemic; and a Lacrimosa (Animal Rights) set to a quotation by Joaquin Phoenix. The Pie Jesu is dedicated to the memory of George Floyd; it features quotations from Martin Luther King Jr. with the movement lasting 8 minutes and 46 seconds, the same length of time that Floyd was held down for – I consulted with Josette Simon OBE to help get the messaging of this right.

Lux Aeterna refers to the battle for human rights. The final movement, In Paradisum, provides a message of hope, enjoining us to create the world we really want to live in.

She’s been surprised to what great an extent people have come to interpret the messages of the piece and make them their own. She feels that the work is accessible and universal.

She’s very grateful to the Musical Director of BSO Voices, Pete Harrison, the BSO’s Head of Marketing, Anthony Brown and the wider BSO for giving her the opportunity to have the work performed.

So, what have been the most important influences on her musical career or interest in music?

Her mother is a professional musician, and she is indebted to her. She played the piano from the age of 3 and took up the cello at 10. In her early years she was much influenced by Jacqueline du Pré, and also developed a love of Elgar.

She spent 12 years in the orchestra pit doing panto at the Kings Theatre in Southsea and has fond memories of Portsmouth.

What have been the greatest challenges of her musical career so far?

Juggling her time between performing, composing, teaching and running her animal sanctuary.

How does she describe her musical language?

How does she work?

If she is in a creative phase, she’ll wake up in the night and want to put her thoughts down on paper. For Requiem 2020 she effectively composed the whole work in one sitting.

Are there any composers for whom she feels a particular affinity?

Her work has been likened to that of John Williams, Karl Jenkins and Mozart.

What is her most memorable concert experience?

If the external doors open, a great wind always blows through the orchestra pit at the Kings Theatre. On one occasion this meant that the wind wafted off a piece of music, and she hasn’t noted it was missing until she had to ad-lib through the final movement. A great deal of panic was recorded on camera!

What advice would she give to those who are considering a career in music?

If you have got the talent, and have a good gut feeling, stick with it and don’t stop.

How would she define success as a musician?

Being able to get music out of her head onto paper!

Carrying on composing. She’s writing a violin concerto and hoping that she can attract classical stars, using the medium of film and TV.

Teresa studied cello with Ioan Davies, and piano from the age of 3, with a stint under the tutelage of Professor John Byrne.

She deputised as a musician in the West End for shows such as The King & I and Fame, after which she began her musical director career with a season on cruise ships.

Musical Supervision includes:  Over The Rainbow, Popstar the Musical, X Factor the Musical  (National Tours) and The Jungle Book at the Citizens Theatre, Glasgow. She was also involved as an arranger for the Coronation Street of Dreams project.

TV: Teresa was piano consultant and musical arranger for Mapp & Lucia for the BBC. She also played Anna Chancellor’s hands!

She has arranged music for Sky Drama Fortitude, Amazon’s The Collection, and most recently composed and created sound design for the BBC Radio 4 play Eastern Star.

In 2015 Teresa co-founded her own theatre production company and since then as well as producing over 25 professional shows all over the UK, she has created sound design and composition for each of them.

Teresa works regularly with the Bournemouth Symphony Orchestra, as an arranger and pianist for BSO Voices, the BSO’s Southampton-based community choir.