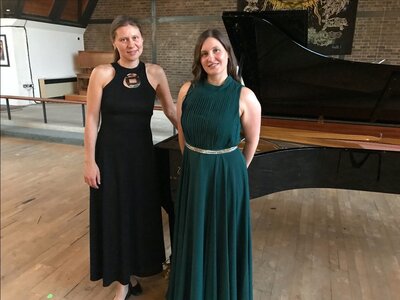 The Chichester Music Society had their first 2021 Concert that finally had a live audience, and as usual the Society met at the University of Chichester, where 30 members and guests attended on 9 June. The artists were Anna Gorbachyova-Ogilvie [soprano – right in photo] and Tanya Ursova [piano].

The programme was a fascinating mixture of Russian, German and French songs, involving music by well-known composers such as Tchaikovsky and Rachmaninov, Richard Strauss and Poulenc. Interestingly they also included music by other lesser-known composers such as Henri Duparc, and Anna chose his Chanson Triste to open this concert. Immediately the audience was captivated by her confident and dramatic conviction, her volume, which, when needed, was impressive, and her ability to temper this appropriately according to the demands of the music.

Another particularly interesting choice was In the Autumn, a piece which was written by Georgy Sviridov who only died in 1998. Much of his career had been spent working in the Soviet era, but this piece was part of the New Folk Wave, and Anna and Tanya together created a memorable performance which demanded both sensitivity and emotional musical scene painting.

Anna sang throughout with both technical fluidity and produced some highly polished singing with a voice full of emotional intensity, which was particularly noticeable in her rendition of Richard Strauss’ Three Songs of Ophelia from Shakespeare’s Hamlet Opus 67.

Tanya Ursova’s accompaniment was fluid and at times fiery, at times breathtakingly haunting, always anticipating the mood of each piece, and she was a perfect instrumental companion. She also played a piano solo by Rachmaninov that was well chosen to demonstrate her ability to articulate both poignant, moving music, as well as light-hearted crescendos and more melodic themes.

The concert programme ended with a sensitive performance of Poulenc’s Fiancailles pour Rire where much of the music was anxious and wistful. The Duo ended the concert with an encore by Gershwin that certainly lightened the mood.

This concert was a prime example of what the Chichester Music Society does best, which is to introduce our members to new music, as well as reminding them of old favourites. Chairman, Chris Hough, thanked the two musicians “for giving the Society a wonderful evening of marvellous music”, also thanking Tanya Ursova for her valuable work on the detailed programme notes and translations which greatly added to the audiences understanding & enjoyment of the music.