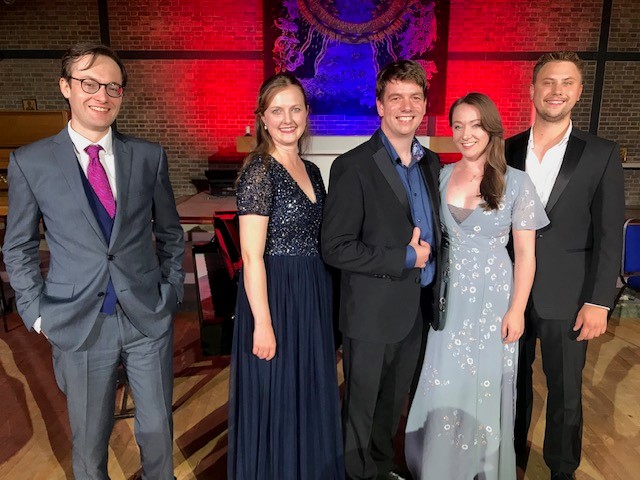 The Champagne Quartet was welcomed by the Chichester Music Society on 15 September 2021 at the University of Chichester as their opening autumn concert. The Quartet is an operatic vocal quartet established in 2016, made up of graduates of the Royal Welsh School of Music and Drama, delighting the audience as their programme of well-known opera favourites, often from Italian composers, unfolded.

The programme opened with the four musicians performing the fun and rather exuberant Drinking Song “Brindisi” from Verdi’s La Traviata. This was sung with a boisterous raucous flavour that set the tone for an enjoyable evening that the audience certainly appreciated in person.

After that, the programme was spread between either solos, duets or three of the Quartet, moving through Donizetti and Rossini, and then on to The Flower Duet from Lakme by Leo Delibes, which was sung by Erin Alexander, who had previously sung for the Society, and Clare Eccles. This was a delightful, often nuanced, performance by both singers. Both musicians were throughout technically assured, and Erin particularly had a lovely clean sound that projects strongly.

Later in the evening Clare Eccles was joined by Ross Wilson in a performance of Franz Lehar’s Lippen Scheweigen from The Merry Widow. The dynamic between the singers was natural and effortless and was played to maximum effect. In fact, the acting of the whole Quartet was effortless and effective throughout, and substantially added to the overall enjoyable atmosphere that was being created by the music.

The accompaniment on the piano by Guy Murgatroyd was throughout the concert understated, yet acutely judged according to the demands of each composer. A thoroughly outstanding example of how important it is for any singer to have a sympathetic and understanding musician at the piano.

The concert concluded, after some Mozart songs from The Magic Flute, with a rendering of the whole Quartet singing Goodnight Quartet from Martha by Frederich Ferdinand Flotow, a simple, calm conclusion to the concert. Chris Hough, Chairman of Chichester Music Society, said, “This was a fabulous evening with some marvellous singing of many well-loved opera favourites. The Quartet and Guy are to be heartily congratulated!”