Review: Chichester Singers “Messe Solennelle” and celebration of twinning of Chichester with Chartres 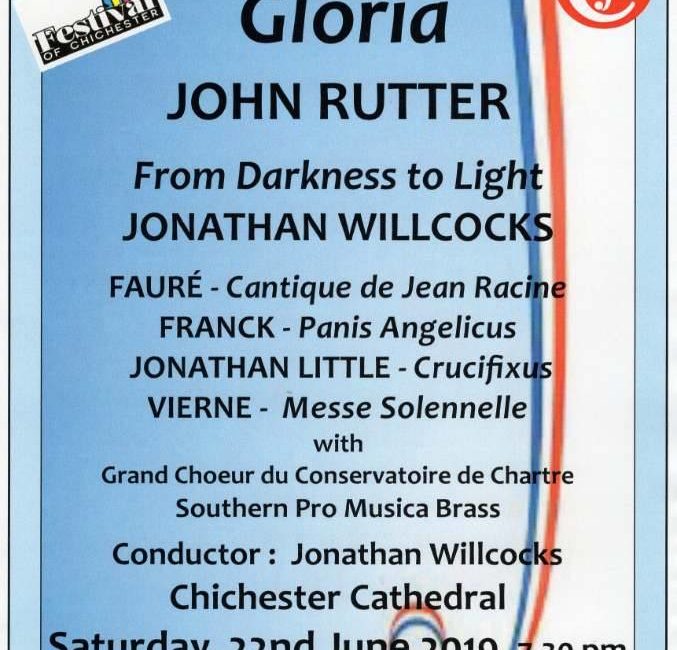 As their part of the Festival of Chichester, the Chichester Singers produced a rather special concert in the Cathedral. To an extent, it was a celebration, both of Jonathan Willcocks’ 40 years as the Singers’ conductor and also of the 60th anniversary of twinning between Chichester and Chartres. As an affirmation of the friendship between our two cities, the Singers were joined for this performance by fifteen members of the Choir of the Chartres Conservatoire. A number of Chartrains were also in the audience.

Celebrating the link between the French and English cities, the concert programme consisted of French and English choral music. The first work did not cause any language problems for the two choirs, as it was sung in Latin, the Messe Solennelle by Louis Vierne, a former pupil of César Franck. The work started powerfully, with a strong brass section from Southern Pro Musica Brass, and the chorus entered with equal power and kept admirably together as the accompaniment was joined by the organ and percussion. The performance of this Mass set the scene for most of the works in the programme, with strong singing accompanied by organ and brass, with little input from soloists or use of counterpoint.

The second work was of great interest to the audience as it was a composition by the conductor, Jonathan Willcocks, called From Darkness to Light, which had been commissioned by a choir in Texas, and set war poems by Ryland Baldwin, a member of that choir, to music. The organ, joined by the chorus singing very quietly, sets a sense of mystery, and the work achieves subtlety by combining the Latin text of a requiem mass with the English words of death and grief. One of the six sections was admirably sung by baritone Thomas Isherwood, and the chorus did justice to the other five sections, including a gentle unaccompanied Lacrymosa that was almost a lullaby.

Another choral work by a local composer, which was new to the audience, was Crucifixus by Jonathan Little, Professor of Music at Chichester University, which is a setting of 15th/16th-century words, which were hard to understand even for a modern Englishman. However, the Anglo-French chorus rose to the occasion and made a confident entry into the rather dissonant start to the work and mastered the challenging complexity of the composition, developing with the accompaniment a rich and finally beautiful synthesis.

The other works in the programme were more familiar and less challenging. Fauré’s Cantique de Jean Racine, a setting of a 17th-century French poem for chorus and organ only, was performed sweetly and gently, with organist Richard Barnes providing a delicate accompaniment. Richard Barnes was also the accompanist, on the piano, to two songs by Reynaldo Hahn sung by the baritone with great beauty and feeling.

Panis Angelicus by César Franck, is one of the nation’s favourite songs, but on this occasion the solo line was sung, not by a tenor but by the sopranos, with the rest of the chorus joining in after the first verse to produce a thoroughly enjoyable sound. The final work in this very varied programme was John Rutter’s Gloria, another well known and well-loved piece. This involved the Singers and members of the choir from Chartres, the Southern Pro Musica Brass and Richard Barnes at the organ, who is now retiring after 24 years as the choir’s skilled accompanist. Under the energetic direction of Jonathan Willcocks, they all contributed a lively finale to an enjoyable and interesting concert.