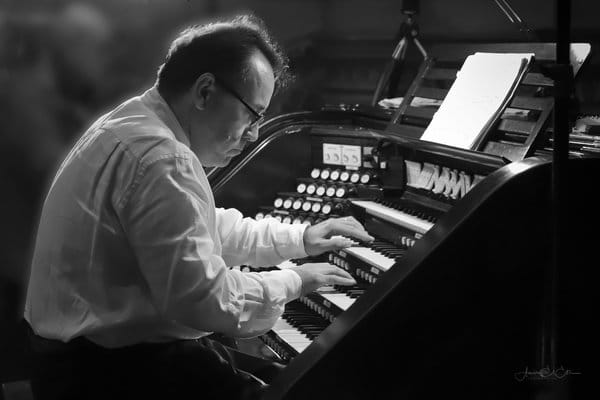 As part of the Portsmouth Festivities, David Briggs returned to Portsmouth Cathedral for the first time in over a decade to give an afternoon recital of transcriptions of well-known orchestral works.

The recital opened with the finale of Saint-Saens’ Third Symphony ‘Organ’. Soon after the opening chords thundered around the cathedral, David quickly explored the full range of timbres available to him on the cathedral’s Nicholson organ, bringing out solo lines on stops replicating the instruments for which the solos were originally written.

The Saint-Saens was followed by Vivaldi’s Concerto in D minor, transcribed by J. S. Bach (BWV596). Quite a contrast to the Saint-Saens, this further proved David’s virtuosity, applying sensitive and delicate playing when required, alongside the grander movements of the Concerto.

This was followed by a leap forward in time to Wagner’s Liebestod from Tristan and Isolde, again bringing out the orchestral colours which the work was composed with. David had no problem in creating the range of emotion through harmony and dynamics that Wagner is known for.

After Ravel’s Ma Mère l’Oye, transcribed by David for a concert at the Royal Albert Hall last year, in which he managed to extract further colours from the organ, the recital concluded with an improvisation on themes submitted by the audience. These were Heart of Oak, the Simpsons Theme, I saw three ships come sailing in and a theme composed by an audience member. David improvised on each of these themes separately, creating a four-movement work. The final theme was turned into a fugue, before culminating in an amalgamation of the four themes to create a grand finale.

This was a truly extraordinary recital in which David Briggs demonstrated through his immense virtuosity why Mozart called the organ the ‘king of instruments’, and provided a thoroughly enjoyable afternoon for all in attendance.