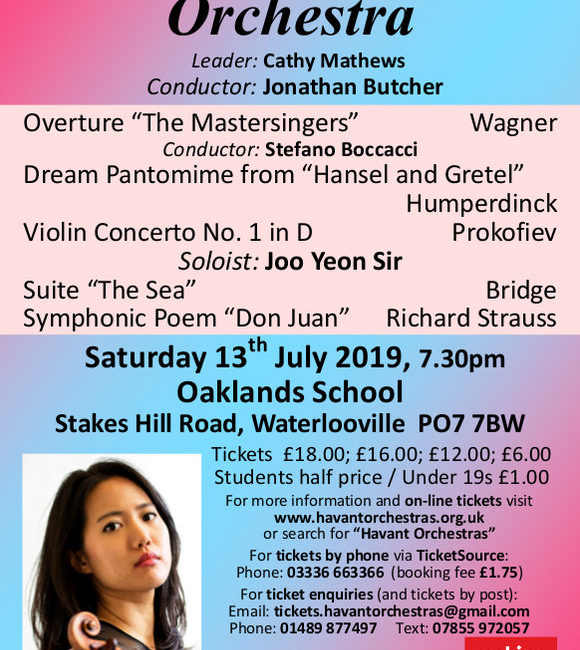 The Havant Symphony Orchestra brought their season to its conclusion with an ambitious and challenging programme of masterpieces, which were performed with great commitment and skill.

The orchestra was joined by the soloist Joo Yeon Sir in Prokofiev’s First Violin Concerto, whose performance combined virtuosity and refinement in equal measure. Her warm tone and rhythmic accuracy were enhanced by the beautifully balanced orchestral contribution under the direction of conductor Jonathan Butcher.

The concert began with music by two German romantics. With its slow pulse and extended lines, the sublime Dream Pantomime from Humperdinck’s opera Hansel and Gretel demanded and received richness of tone and accuracy of intonation from the strings. Wagner’s celebrated Mastersingers Overture received a mobile and well-articulated performance under conductor Stefano Boccacci, the latest holder of the bursary created by Bob Harding and his wife Beryl. Sadly she passed away recently, and this made a fitting tribute.

After the interval came Frank Bridge’s Suite The Sea, the work which inspired the young Benjamin Britten to become a composer, and finally Richard Strauss’s symphonic poem Don Juan. Here the magnificent writing for the horns made its mark in suitably heroic fashion.