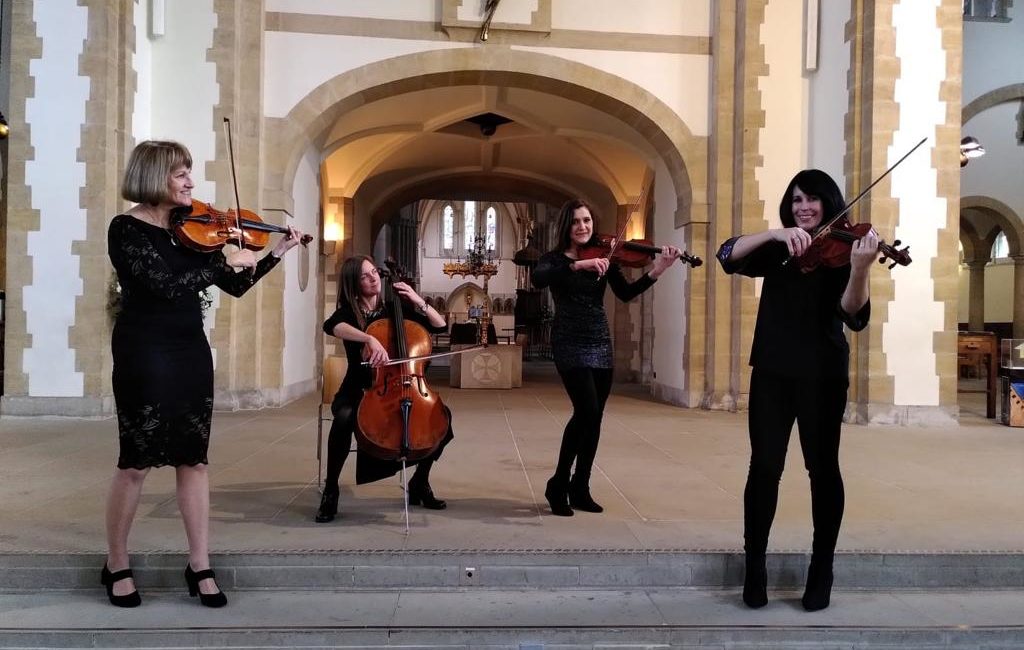 Ensemble C are made up of four parts, as was their programme at St Mary’s. As a string quartet without violins they could be compared to Abba without Agnetha or The Stylistics without Russell Johns Jnr but in fact it gives them three violas who can take the lead or work together as a unit counterpointed with the cello or, as sometimes happens, all four are involved in the same rich tapestry. It is richer when the violas are in their lower register with their lush, velvety tone rather than venturing into violin territory.

The four parts of the programme are entitled Renaissance Works, Music of the Baroque, Classical selection and Folk Music.

Four miniatures from the C17th, more or less, began with Cavaccio bringing the fading late afternoon light indoors; Thomas Brewer and Thomas Lupo gathered pace before the spirited La Battera by Antegnati completed the evocation of the age of viols in its beguiling formality.
Bach’s canon alla duodecima wrapped the unit together in a perfect little exercise in intricacy that any elaborate designer would be thrilled with and Ensemble C brought life and joy to the potentially dry area of mathematical perfection. St . Mary’s are to be congratulated on their programmes being more detailed than those of their local team-mates that provide these concerts but today’s didn’t identify the composer of Concerto Grosso, Op. 6, no. VIII.  I attributed it to Handel in a quick game of Face the Music but I’m glad I checked. It was Corelli so I’m not Robin Ray yet but it was Corelli that Handel learnt how to do it from and so I couldn’t have been any closer without being right. In much of it, Sophie Hurr’s cello led the way with the violas doing the embellishing but, as she says in the notes, it’s a ‘democratic’ format and the whole is more than its constituent parts.
Peter Warlock’s Capriol Suite, being C20th, was in places more strident and less decorous. It’s an ambitious piece and added at least one dimension to the set with its exploration of pizzicato and variations in tone and technique. There is hardly any music written for vla, vla, vla, vlc, if any, and so the group needs must rely on what’s been arranged for them. Any local composers coming across them ought to set their minds to doing something specifically for them. As it is, Ross Cohen arranged this, and the next two pieces.
How faithful the arrangements are was demonstrated by the familiar item, the Allegretto from Beethoven 7 with its haunting funereal march that resolves into something slightly less ominous. Whether only from knowing the piece or finding how well it matched up to the ‘middle strings’ available, it worked very well and was possibly the highlight.
Foggy Morn and the Irish Sherry Suite were both ‘Trad Irish’, which means Danny Boy, some folk tunes jigs which show have far we’ve come from the courts of Rennaissance Italy.The energetic finale left us a long way from where we began. If we had thought that three violas and a cello might be a limited palette, it proved otherwise and I doubt if Ensemble C are going to specialize in lachrymose Dowland settings, the infamous Art of Fugue or any other things a viol consort might choose to. It’s more likely they’ll expand further. I don’t know if the Wagenseil Music for low strings can be done without the double bass part but there’s a Beatles medley, the likes of Steve Reich or Philip Glass or any amount of other music available to be used to demonstrate that ‘less is more’. My old cassette of Pictures at an Exhibition with piano on one side and orchestra on the other eventually persuaded me that Ravel needn’t have bothered although the Bournemouth Symphony Orchestra later reclaimed much for the full-scale version. They’ll be in Portsmouth Cathedral on Thursday. It will be worth the effort to see them there.
Share This Post
EVENTS