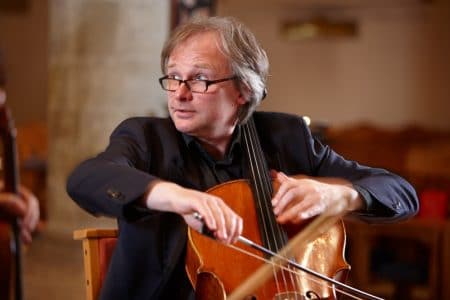 Following the resounding success of his opera, The Marriage of Figaro, Mozart was commissioned to write Don Giovanni, the overture from which a slow and dramatic introduction contrasts vividly with lively and spirited music to follow. Indeed, this very opening was selected for the Havant Chamber Orchestra concert on Saturday 8th February and the conductor, Robin Browning, secured a tight and highly focused performance which set a standard of high expectation for the audience who were packed tightly into the Holy Trinity Church in Fareham.

What then followed was a true delight; three works which featured the exquisite beauty and panache of the cello, played by the internationally renowned soloist, Mikhail Lezdkan. Acclaimed for his performances in Russia and spanning Asia, Australia, New Zealand and Europe over a thirty-year period, the highly experienced chamber musician enabled the mesmerised concert-goers to enjoy a skilfully crafted approach commencing first with Tchaikovsky’s Variations on a Rococo Theme.

Understood by many as written in homage to Mozart, there was a fine balance and communication achieved in the structure of the ‘rococo theme’ which features the solo cello followed by a light and well-refined woodwind reply. The variations which followed were performed with real grace, with highly decorative passages and virtuosic features lightly added in a dance-like manner and deceptively easy on the ear of the listener. To contrast and enabling the full lyrical qualities of this performer to shine through, the highly popular Andante Cantabile for cello and string orchestra followed by Glazunov’s Chant du Ménestrel concluded the first half. In Glazunov’s tribute piece to early roving poet-musicians, the rich tonal qualities of Lezdkan’s playing were balanced by the well-directed interjections from strings and wind and the delicacy and style of short soloistic feature passages for individual players here.

Deriving its name from the “ticking pulse” which accompanies the main theme of the second movement, Haydn’s Symphony No 101 The Clock was performed by the orchestra in the second half with the feeling of a large-scale grandeur overall achieved by these fine musicians. Indeed, the sense of shared satisfaction at the close from performer and listener alike can rightly be attributed to the quality of musicianship and professionalism of this fine orchestra for whom a strong following is well-deserved.