Review of Zimbe! by the Froxfield Choir 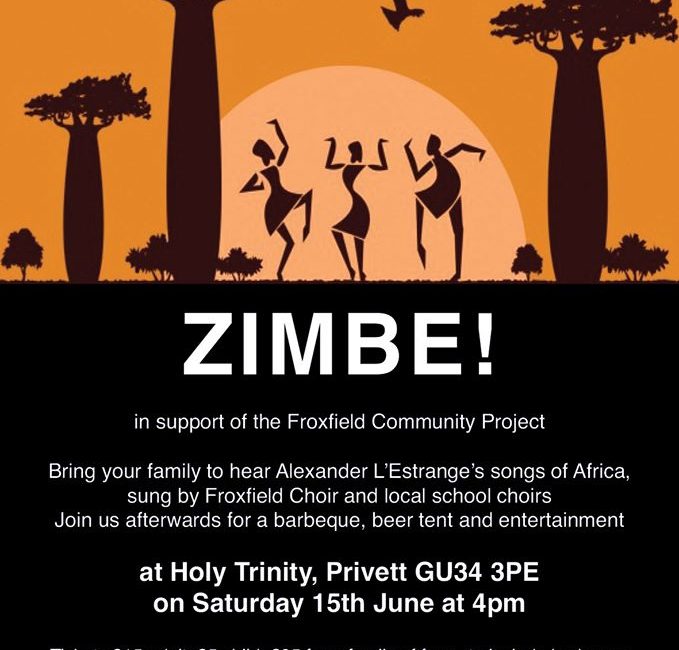 The June drizzle may have been a far cry from African sunshine, but it did nothing to dampen the spirits at Privett Church on Saturday, when Froxfield Choir, together with pupils from Froxfield and Steep primary schools, performed Zimbe!, Alexander L’Estrange’s arrangement of traditional African songs.

African traditional music is essentially social and participatory, so this was an ideal choice for an event on behalf of Froxfield Community Project that involved all age groups and continued after the main performance with a hog roast and informal African drumming led by Kristian Bediiako. Conductor Michael Servant was relaxed and entertaining as he introduced the proceedings, warming up the children and the willingly cooperative audience with simple action songs. How many of us had expected to be singing ‘Pizza Hut, Kentucky Fried Chicken, MacDonalds’ while illustrating each eatery with hand gestures, or stamping our feet to a song about picking apples, while the children sang it in Norwegian?

The feel-good community atmosphere spread through the performance of Zimbe! that followed. The choir, bright in their coloured tops, sang out confidently in the unaccompanied sections and brought out the variety of moods in the different songs – light-hearted in the children’s songs, hypnotically rhythmic in Ilanga libuya, high-spirited in the drinking song, Vamudara, and (perhaps the best of all) hushed and atmospheric in the funeral song Aleluya/Thuma mina, when the choir divided between the front and back of the church. The children threw themselves into the whole proceedings confidently, earning applause and cheers for their enthusiasm, whether demonstrating the warm-ups or singing and clapping during the performance. The choir was well supported by Naomi Ides (alto saxophone) and Merryl Spong (piano), with Laura Murray adding African percussion and Tom Lydon driving the music powerfully from the drum kit.

Although the basic tunes are often simple, there are complications in the arrangement and there were occasional difficulties with balance and continuity. Some sections of the choir were not at full strength; the sopranos, who made up half the total number, showed the quality and evenness of tone that the choir can achieve at its best, whilst the more energetic songs inevitably lacked weight in the lower parts. Transitions between movements sometimes wavered before settling into a new groove, and only a few members of the choir looked as if they were enjoying the physicality of African rhythms!

Before Zimbe!, the choir performed three short pieces. Samuel Barber’s Agnus Dei was a challenging choice as an opening, and there were a few issues with intonation and balance, but both the atmospheric beginning and the powerful climax were perfectly suited to the fine acoustics of the church. John Rutter’s A Gaelic Blessing and The Lord bless you and keep you were well within the choir’s comfort zone, receiving assured performances with careful attention to details of phrasing and diction.