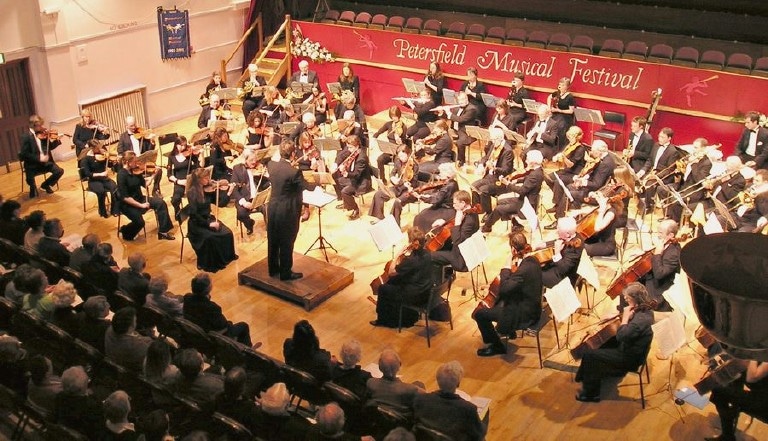 The Petersfield Orchestra’s concert for this year’s Petersfield Festival was the third with their new conductor, Mark Biggins, but his first at the Festival; and with the prospect of Rachmaninov’s mighty second symphony as the major work in the programme, the event was eagerly awaited and drew a capacity audience. They were not to be disappointed.

The first half of the concert prefaced the symphony with two works of very different styles and nationalities. Humperdinck’s Overture to Hansel and Gretel was strongly characterised, from the gentle but perilously exposed opening horn quartet to the sprightly woodwind themes and dramatic climaxes for full orchestra that follow. Austen Scully was the virtuoso soloist in Saint-Saens’ Cello concerto no. 1. In contrast to the sentiment of Humperdinck and full-blown romanticism of Rachmaninov, this was a performance that relished the Gallic poise and wit of the music. The orchestra accompanied with elegant precision in the deliberately old-fashioned minuet section, and the soloist really came into his own in the final section, with its swirling lines, rhetorical flourishes and extrovert finish.

Rachmaninov’s Second Symphony has had a chequered history, often – as Piers Burton Page’s programme note explained – subject to cuts and alterations even in the hands of the most experienced conductors and orchestras. But on this occasion the ensemble of 74 players – perhaps the largest group the Petersfield Orchestra has ever assembled? – demonstrated that this generously-proportioned work can be entirely convincing in its original form. Under Mark Biggins’ nuanced direction, the music kept a sense of purpose through its huge paragraphs. In the first movement there was an unhurried sense of forward movement, with attention always focused on the instruments carrying the musical material. Leading voices sang out; subsidiary parts were kept in the background; the conductor was evidently in contact with every section of the orchestra. The second movement sprang onto the scene with vigour, the strings providing a lush texture in the episodes of rich melody. There was fine solo woodwind playing in Giacomo Pozzuto’s cor anglais solo early in the work, and in Rob Blanken’s expressive clarinet melody in the third movement, where the slowly rising and falling orchestral climaxes were carefully graduated. The final movement was again full of character: excitable – even light on its feet – at the start, and powerful in the climaxes, when the volume of the full brass section called for a bigger space than the Festival Hall.

At the interesting pre-concert discussion between Piers Burton-Page, Austen Scully and Mark Biggins, Mark commented that his aim was ‘to ride the wave of the music’. He succeeded – magnificently!