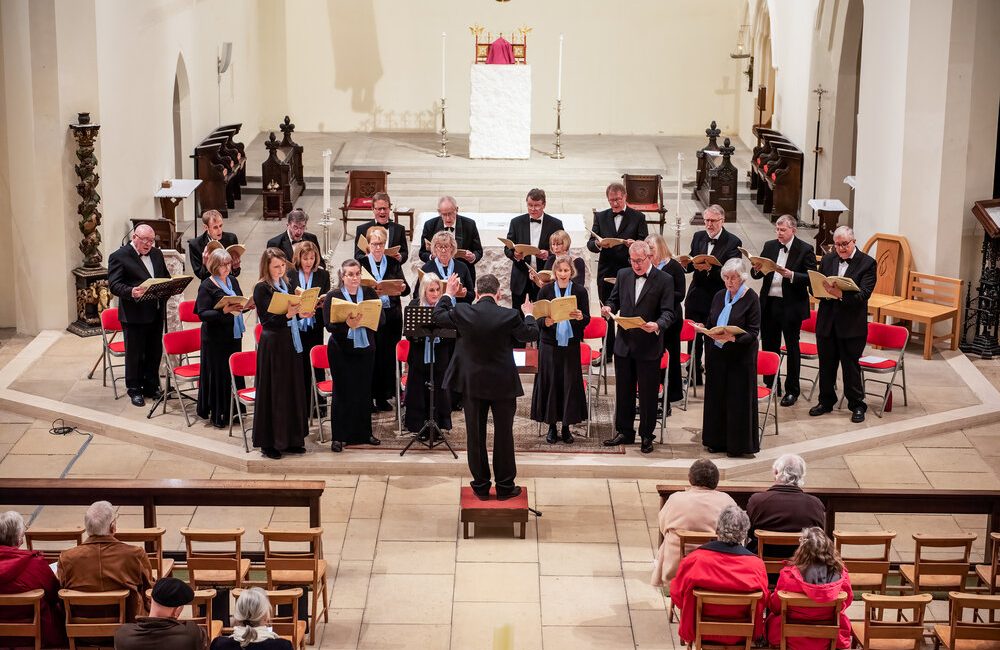 Ours is essentially a tragic age, so we refuse to take it tragically. C20th composers could hardly be expected to write music as confident as that of the Age of Enlightenment. Bach and Handel don’t bring with them much religious doubt but the Portsmouth Baroque Choir don’t limit themselves to music from the baroque period.

One thing they do, though, is to explore some lesser-known repertoire, such as on this occasion the Mass by Joseph Jongen from 1945 which musical director, Malcolm Keeler, told me he “picked up a second-hand copy of Jongen’s Mass from Oxfam in Bristol in 2015. I bought a CD of the work a year later. I always felt it would go well with the Duruflé, so I’ve waited until the right time (our anniversary) to perform it, the Duruflé being one of the works performed in our first concert.”

I decided not to listen to it ahead of the concert in order to approach it with no more preconceptions than knowing it was written by a Belgian in 1945 in memory of his brother.

In the clean, well-lit space of the Church of the Holy Spirit the Kyrie began with waters lapping the shores of eternity. Almost tentative, with the organ showing the way, it builds to a wall of sound in the Gloria, the choir impressive with their number depleted to 22, a high point fittingly on resurrexit and Malcolm coaxing a controlled surge to the finish.

There was a change of pace from the steady pulse of the Mass as Peter Gould played a Toccata by way of a cadenza, glittering in the fingers and powerful in the feet.

The Sanctus was more celebratory, the Benedictus tender in its ensemble solo parts with Julia Spurgeon, Jane Jones, Robert Campbell and John Holliday before the Agnus Dei asked that we be ‘granted peace’. Written when it was, and where, it is deep in consolation and hope in spite of the horrors that humanity had unleashed on itself in a way that something like Britten’s War Requiem perhaps isn’t.

After hearing the Lord’s Prayer in French in his Notre Père, Duruflé’s Requiem, op. 9 in a catalogue that so frugally only extends to 14, was written at almost the same time.

For the most part it is introspective, in the meandering flow of the organ part most notably, but the Kyrie is expansive, the acoustic again being warmed by a choir rising to the occasion until Phil Stokes’s baritone rose from somewhere de profundis in Hostias et preces tibi. The Sanctus was an epiphany, shining forth, and Ruth Sands provided a memorable high point in the Pie Jesu, where, if it hadn’t been apparent already, one understood that Duruflé was not unaware of what Fauré had done with the very same text 60 years earlier.

The Lux aeterna was literally lightsome before the Dies illa, dies irae/calamitas et miseriae, ‘that day of wrath, calamity and misery’ (and we’ve all had them) built ominously to the brief prayer of In Paradisum, which again might have referred us back to the template of the earlier work and made us reflect that Duruflé is not a ‘poor man’s Fauré’ but perhaps a less immediate or quite as sumptuous a disciple.

Some might say these gently optimistic pieces, in their way, don’t address the dark side that humanity had revealed to itself in the way that music by Shostakovich, for example, so often does, and despite reaching towards moments of drama, the overall effect is more like a comfort blanket – but there’s always a use for one of those. None of that is in any way a criticism of either the composers or the fine job Malcolm Keeler and his choir continue to do in presenting such work with such care.

I’ll hope to get to Chichester on Sun 3 July for the choir’s next project, Handel’s Israel in Egypt. His was essentially a glorious age, for him at least, and he insisted on taking it gloriously.