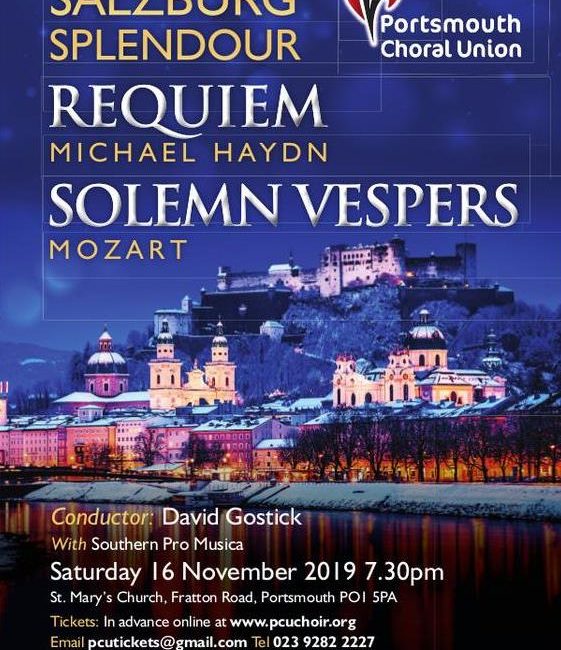 Two choral works, one well known and the other something of a rarity, delighted Portsmouth Choral Union’s enthusiastic audience in their ‘Salzburg Splendour’ concert at St. Mary’s Church Portsea on Saturday.

The well known – Mozart’s Solemn Vespers – opened the concert and, with some rather clever programming, five of the same composer’s Epistle Sonatas were performed between the works individual movements. There is very little that can be described as ‘solemn’ about these Vesper settings, and the similarly joyful Sonatas were well chosen and apposite. With fine toned singing and nuanced dynamics, Portsmouth Choral Union once again demonstrated their reputation as one of the leading amateur choruses in the South of England.

Michael Haydn, brother of the more well-known Joseph, provided the musical rarity with his Requiem Solemne. This is a work that Mozart clearly knew well and in it there are many pre-echoes of his often performed Requiem. Here the choir rose to the challenge of the works dramatic nature and with a well-balanced team of four soloists, this work was brought vividly to life – and deserves to be heard more often. Of the soloists, Luci Briginshaw had most to do and she was particularly eloquent in her poised performance of Laudate Dominum from the Mozart Vespers.

Under David Gostick’s clear direction, Southern Pro Musica provided discreet musical accompaniment and it was good to hear them take centre-stage in their stylish performances of the five Mozart Sonatas.