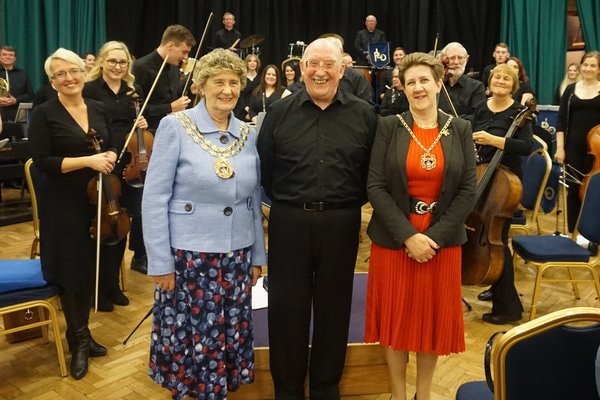 Innovative Ed cast the orchestra’s net more widely with a crowd-pleasing repertoire at the Titchfield Community Centre. This is the first time in more than a decade that the PLO has performed away from its usual haunts – the Admiral Lord Nelson School, Buckland Community Centre and the Church of the Resurrection at Drayton.

Despite atrociously rainy weather the audience filled the hall. The Mayor of Fareham, Councillor Mrs Pamela Bryant and the Mayoress, who is also her daughter, Councillor Louise Clubley, also graced the occasion with their presence.

The evening’s programme could not have been more varied. A Nursery Rhymes Suite and The Teddy Bears’ Picnic amused those old enough to remember such delights. Tunes from Les Miserables and Oklahoma pleased aficionados of musicals while Vivaldi’s Winter from the Four Seasons and Dvorak’s Slavonic Dance No.4 pandered to the tastes of the highbrows present.

Bugler’s Holiday was brilliantly played by the orchestra’s three trumpeters, who surprised audience and orchestra alike by coming on dressed as cleaners. Mixed in with this musical potpourri were two rhythmically tricky, pieces from Central America. In short, it all went down a treat as there was something for everyone in this successful outreach for the Portsmouth Light Orchestra.