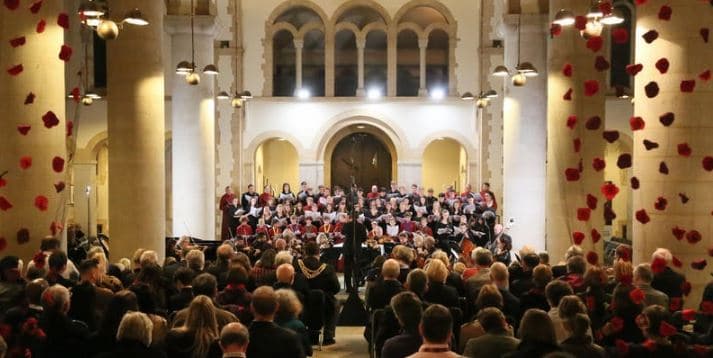 Working with conductor and composer, Jonathan Willcocks, PGS musicians along with the London Mozart Players and singers from Castle Primary performed a programme of music inspired by the sacrifices made by so many people for our freedom.

The austere and dramatic Fanfare for the Common Man opened the concert, followed by a performance by 80 young singers from PGS Middle School, PGS Juniors and Castle Primary of Anthem for Peace accompanied by the LMP strings with a beautiful solo cornet played by Elliot Hartridge.

Habina Seo and John Yu performed piano concerto movements by Mozart and Shostakovich, demonstrating a beautiful sense of melody line and great maturity and poise. Butterworth’s idyll, On the Banks of Green Willow, written shortly before his death at the hands of a German sniper, featured our string players playing side by side with the LMP in a performance that was refined and moving.

The second half of the concert opened with Vaughan Williams’ haunting Lark Ascending in an expansive and expressive performance by Ruth Rogers, leader of the LMP. Jonathan Willcocks’ own composition Lux Perpetua, written specifically for Remembrance and featuring texts by war poets, finished the concert. The 160 strong chorus of singers from aged 8 to 80 gave an authoritative and dramatic telling of this powerful work. Congratulations to all involved.