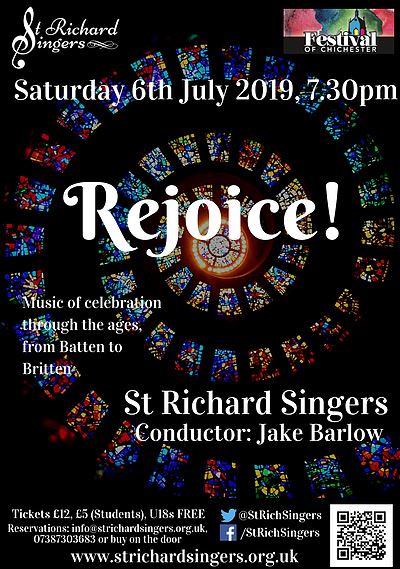 It is one of the many benefits of being a concert reviewer that occasionally one is offered a programme so redolent with nostalgia, I was immediately carried back to my own days as a chorister. On Saturday evening, the St Richard Singers marked the launch of their 50th anniversary season in a sweltering St George’s Church by elevating the audience with a concert of choral motets, canticles and cantatas spanning six centuries and encapsulating the very essence of worship: pure joy.

The proceedings opened surely enough with O Sing Joyfully, Adrian Batten’s spritely setting of Psalm 81 followed by Pitoni’s stately Cantate Domino, displaying the same distilled elation but set within a minor mode. We remained in Italy for Pueri Hebraeorum, Palestrina’s masterful example of Renaissance polyphony. Pitoni was a great admirer of Palestrina, and indeed both held the position of Maestro di Cappella at the Archbasilica of Saint John Lateran, some 150 years apart. Their piety and compositional craft were evident in the beautiful delivery by the choir.

Mozart’s exquisitely melodic Laudate Dominum, from his Solemn Vespers, was a highlight; Charlotte Bateman’s transcendent melisma emerging from the harmonic backdrop with a single word – Amen.

Jumping forward to the twentieth century, the choir engaged Arvo Pärt’s fiendishly tough Magnificat. It’s a common misconception that minimalism’s simplicity must equate to an easy sing – quite the contrary; the intonation is highly challenging, particularly in its unaccompanied context. In this regard the choir gave a valiant effort and all the emotion and nuances of the composer’s famous tintinnabuli style were evident in this meditative work.

It was at this moment that the conductor took the opportunity to reveal his sublime talent as a countertenor, joining the other soloists in Orlando Gibbons’ Great Lord of Lords. All the more poignant as it was announced that Jake Barlow will be stepping down as musical director for the St Richard Singers, and this was to be his final concert. It’s no exaggeration to say his dynamism and flamboyant style have re-energised the choir in recent years and I’m sure he will be greatly missed by choir members and audience alike.

We were then jolted back to our celebratory spirit with Gerald Finzi’s grandiose and ever-popular, God is gone up. A special mention must be made here to organist Tim Ravalde in whose virtuosic accompaniment one could almost hear the trumpets mentioned ringing through the delightful refrain.

The second half saw a return to Merrie England and our soloists to introduce Purcell’s rather aptly titled Rejoice in the Lord Alway. Next, the choir furnished us with some of the finest Teutonic examples in the choral repertoire; the rather dignified Locus Iste from Anton Bruckner, reminding us that he wrote a great deal more than just symphonies, and Haydn’s The Heavens are Telling, from his blockbuster oratorio The Creation. This remains for me a personal favourite; it’s a work that just ticks all the right boxes: a timeless melody, beautiful harmony, clever counterpoint and, in this performance, you could clearly feel the joy in the choir as they were singing.

The programme closed with pieces by two British giants of the twentieth century. A Child of Our Time is Michael Tippet’s anti-war masterpiece, whose innovative use of African-American spirituals in place of the usual chorales demonstrated the purity of praise over the injustice of their persecution. In the balmy heat of the summer evening, this struck a particular resonance. Finally, we were treated to the entirety of Benjamin Britten’s Festival Cantata Rejoice in the Lamb. It was here that the choir excelled themselves, both invoking a solemn lament and dazzling us with jubilant worship.

Whilst perhaps tinged with sadness at the loss of such an inspirational conductor for the choir, my own wistful recollection of performing these magnificent works was happily evoked by this thoroughly enjoyable evening.