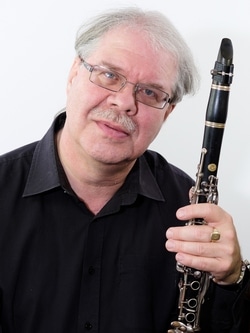 A small but discerning audience escaped the heavy showers outside to be greeted with musical sunshine inside with this fabulously enjoyable concert. The well-established Anemos Trio: pianist Karen Kingsley, clarinetist Rob Blanken and bassoonist, Richard Moore are regulars at St. Peter’s in this and other ensembles. They presented a varied and enjoyable programme of 20th and 21st century music.

The influence of Eric Satie was evident in the largely unknown Chant d’Esperance (‘song of hope/sunrise’) by Henri Cliquet-Pleyel. From the opening piano block chords, a doleful clarinet melody emerged and interplayed with expressive bassoon motifs. Pre-echoes of another composer’s Summertime could be heard just before the music became more sonorous as the sun shone strongly at the music’s conclusion.

The main work was William Hurlstone’s substantial, four movement, Trio in G minor. Richard told the story of his fascinating discovery of the ‘lost’ third movement and the works links to Oxford and the mathematician Roger Penrose. Richard is himself a mathematician, computer engineer and outstanding bassoon player as well as a leading authority on the instrument. A contemporary of Vaughan Williams and Holst, Hurlstone would have been a much better known had he lived past his untimely death at age 30. This substantial work demonstrated Hurlstone’s huge talent: his music is richly inventive, harmonically sophisticated and atmospheric. It was played with skill, tenderness and passion by Anemos who were perfectly attuned to this splendid music.

The final work, Collaboracao was a modern tour de force – both by contemporary composer Mike Mower and Anemos. Mower is best known for his jazz group ‘Itchy Fingers’ and Anemos certainly needed twitchy fingers to get around the dizzying rhythms of this jazz/Latin inspired piece. Feet were tapping in the audience as the wind players whizzed around the full range of their instruments and Karen swung to the Bossanova beat!

A lovely antidote to the autumnal gloom outside. When are Anemos going to issue a recording of these works?