Review: The Chichester Singers: A Child of Our Time 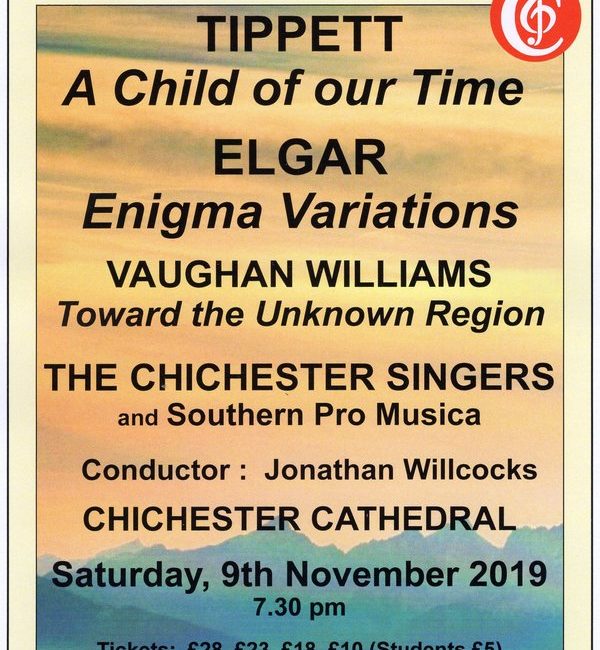 The main work of the Chichester Singers’ November Concert was Michael Tippett’s secular oratorio A Child of our Time, which was first performed 75 years ago.

The Singers’ choice of date for the performance was appropriate, because the work was inspired by the Nazi attack on the Jews and their buildings, called Kristallnacht, which took place on 9th November 1938, after a Jewish boy shot a Nazi official.

Tippett was distressed by the Nazi persecution of the Jews and hoped his work would call attention to the suffering of oppressed people everywhere. The choir, ably supported by the orchestra of Southern Pro Musica, mastered the intricacies of Tippett’s score and brought real emotion to the spirituals that are sung at significant moments in the work.

The bass soloist, Theodore Platt, was the Narrator for the story of the Child, or Boy, and projected his voice well into the space of the Cathedral, though the acoustics of the building were such that most of the audience had to follow the story through the programme notes. The other three young soloists, Charlotte Bowden, Rebeka Jones and Ted Black sang their roles with pleasant musicality and increasing confidence, though, again, the words of Tippett’s libretto could not always be heard.

The chorus and orchestra, under the baton of Jonathan Willcocks performed with admirable power and control, supporting the soloists, playing the parts of the various groups in the story, and especially singing the spirituals of a persecuted people. Let my people go was overwhelming and the final climax of shadow and light leading into Deep River will linger long in the memory.

There were two other works in the evening’s concert, both also by 20th century British composers. The concert began with the song for chorus and orchestra, Toward the Unknown Region, by Vaughan Williams, a musical setting of a poem by Walt Whitman. Whitman’s remarkable text inspired Vaughan Williams to compose a delightful song, which the Singers and orchestra performed with great zest.

Between the two choral works, Southern Pro Musica performed Elgar’s Enigma Variations. Each variation was played with skill and finesse, so the audience could picture the character that Elgar had in mind – the elegant, the boisterous, even the pet dog, and of course Nimrod, Mr Jaeger. The playing of the orchestra and the quality of the sound within the Cathedral made this performance close to perfection.

Once again, the Chichester Singers have given us an excellent evening of music that has been sometimes challenging but always enjoyable.