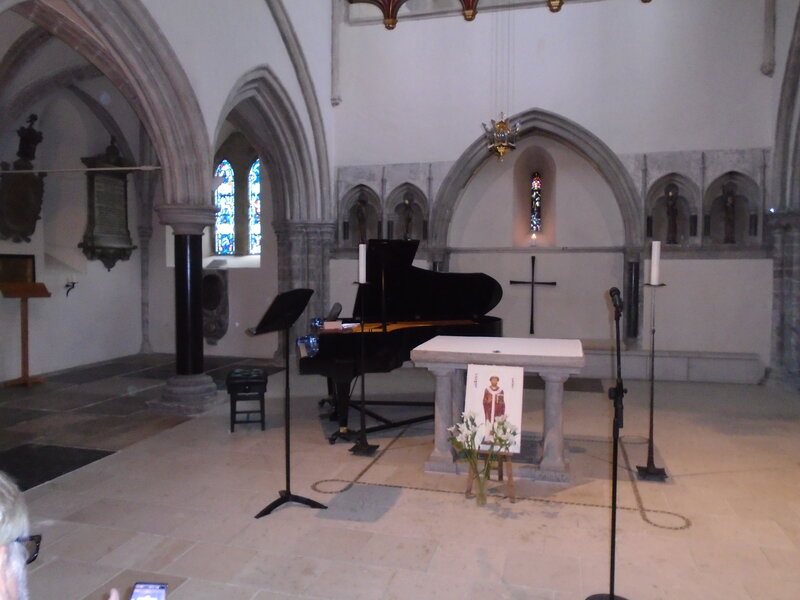 Lunchtime Live! is underway again in Portsmouth which is some of the best news we’ve had for some time. A shrewd move to put the concert space up in the more intimate St. Thomas Chapel made for a warm, full acoustic which benefitted Valentina‘s piano and Catherine‘s violin. It was encouraging to see such a good turnout for this event, too, which augurs well for the future but will mean arriving in plenty of time to ensure a good seat.

The programme was made up of pieces from the forthcoming disc, Myths and Legends, and provided some lesser-known composers for those of us who enjoy such things. The American Romantic, Charles Wakefield Cadman, set us off with some aching, long lines in his Legend of the Canyon given smooth, unhurried treatment by Catherine. If Frank Bridge is better known, his Norse Legend is not, redolent of folk song perhaps and full of apparent regret rising to passion in the higher register.

If Catherine is out front and seemingly the focus of most of our attention, Valentina is always contributing to the conversation eloquently behind her and they combine seamlessly and with great sympathy. The Delius Legende had some soaring violin with rippling piano generating considerable power before a delicate ending that came as some surprise.

The Belgian Joseph Jorgen’s music hasn’t been heard by my ears before and neither has his name. His Legende naive from Aquarelles, op. 59, no.1 had an autumnal feel as much of the programme thus far had. How much that was due to the music and how much was the collateral effect of summer having retreated is hard to say.

All the music thus far could almost have been written by the same composer, their dates not varying by much and the mood being sustained from one piece to the next. The Danish Otto Malling is from a generation or so earlier though and the finale, his Faust Suite, op. 55, extended into something bigger with four character portraits from the famous story.

Faust is restless but not as tormented as one might have expected. I wouldn’t have recognized him from this but Mephistopheles was more demonic, giving Catherine the opportunity to do more than lyricism but she does both very convincingly. Siebel was lyrical and outgoing before the shadowy beginnings of Margarethe which reached an impressive crescendo with a big theme to finish a thoughtfully compiled set.

One asks for no more than such dedicated musicianship and the research Valentina and Catherine put into their esoteric interests. I had no idea what was going to be played beyond the billing that it was music from the new disc. I’m perfectly happy with Beethoven, Schubert, Mozart and the household names that line the shelves here but I’m also always glad of new names. I can’t have been the only one who was grateful for their visit. The autumn is set fair with a number of choice Tuesdays in Chichester booked and plenty more Thursdays in Portsmouth to look forward to. This is what it was supposed to be like.