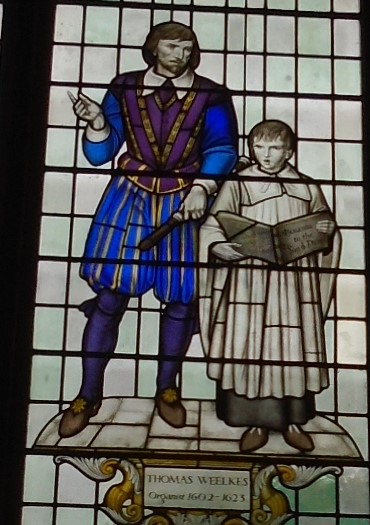 The past is a foreign country; they do things differently there. One thing that Chichester Cathedral did was employ an organist, more than once, having dismissed him in-between times, for drunkenness and blasphemy but if you’re going to build a cathedral opposite a Wetherspoons and then employ a creative artist, you make yourself a hostage to fortune.

Thomas Weelkes died 399 years ago and so more might be anticipated next year, like a CD currently in preparation by today’s performers, although if Weelkes was a local man, remembered in the stained glass beneath which I usually sit, Chichester also has the Belarussian-French artist, Marc Chagall, the Cheltenham composer, Gustav Holst, royal portraitist, Graham Sutherland, and the great Philip Larkin poem as prime exhibits so it’s not struggling.

It is often not useful to think of an artist and their art as one thing and certainly not in the case of Weelkes whose music is sober and not in the least profane. In his day more than in the time since, music involved observance of discipline ahead of any expression of the self. In the Hosanna to the son of David we were immediately into a gently soaring treble line, the economical number of choir here producing a pure, well-balanced sound under Charles Harrison, the current incumbent of Weelkes’s old position. They were augmented by the velvety period viols of the Rose Consort for the Magnificat and Nunc Dimittis in a smooth tapestry which for nearly an hour was to be undisturbed.

The Consort provided interludes by way of two Pavanes and two In nomines, the Pavanes serene in their mellow restraint and the In nomines cascading unhurriedly. Nothing happens too quickly in this music. You won’t be surprised by not knowing what’s coming next as you would be in Haydn’s Symphony mo. 94.

O mortal man was perhaps slightly more intricate; Most mighty and all-knowing Lord made use of the two excellent counter-tenors whose names were not given on the programme and Christ rising again, as the finale, built and grew in stages from solos through ensemble parts to the full choir.

The programme advertised the event as ‘a special lunchtime concert…’, which it most definitely was although it’s not easy to remember any Chichester lunchtime concert that wasn’t special in some way. The disc due next year for the 400th centenary will be worth looking out for, sure as it will be to provide solace for the perturbed spirit.